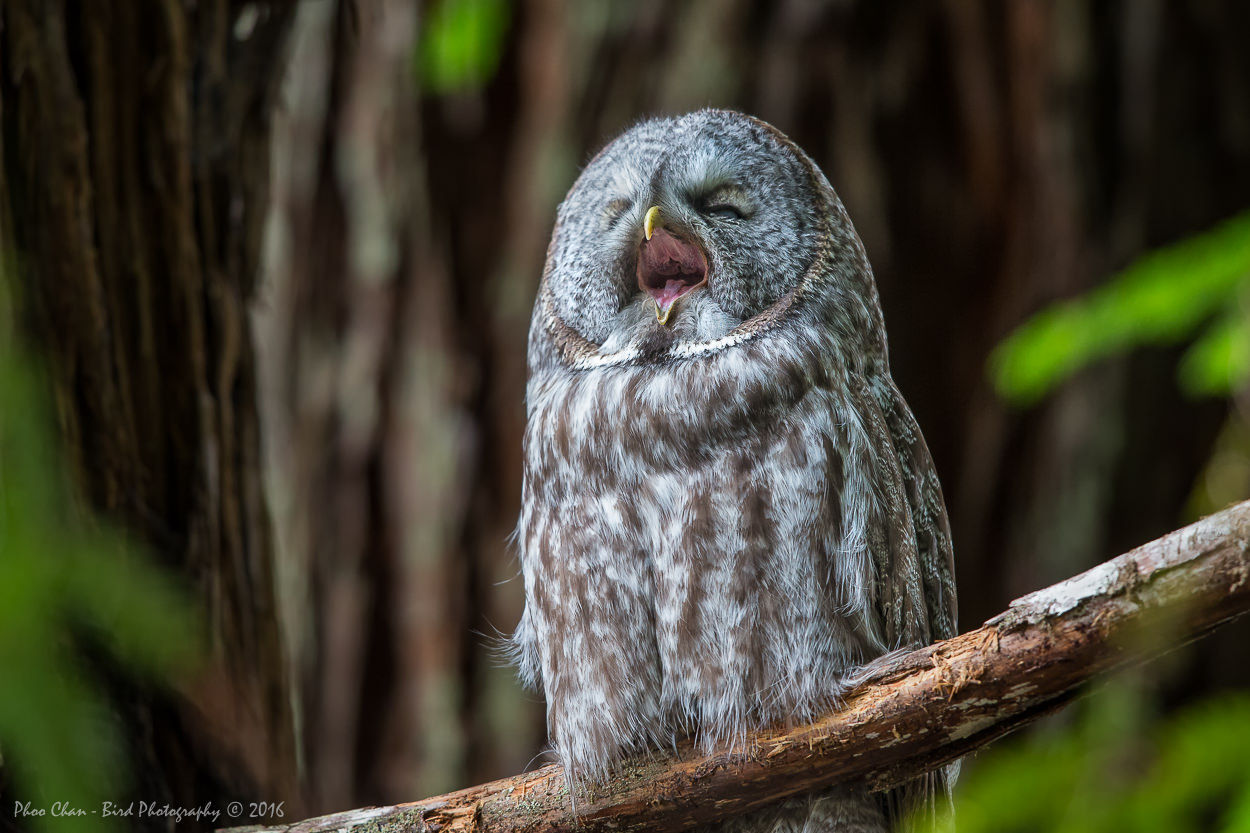 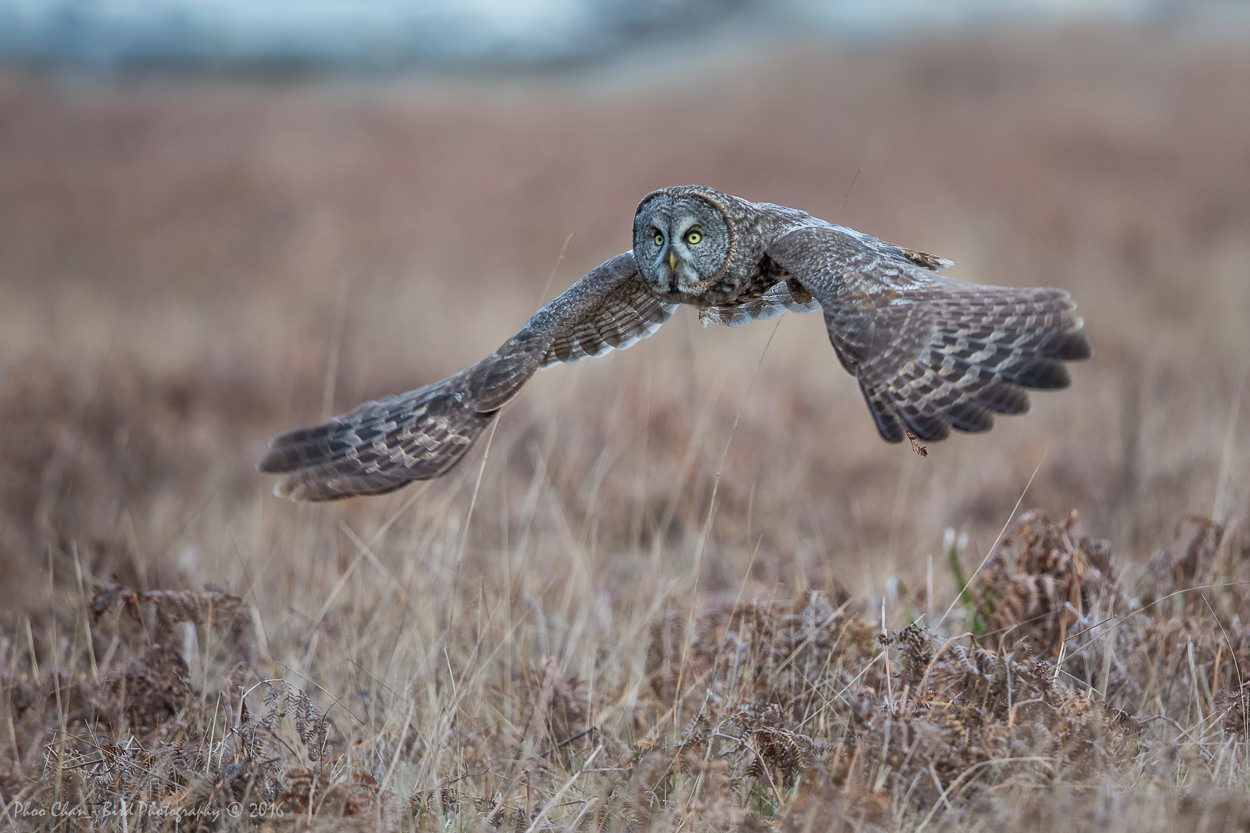 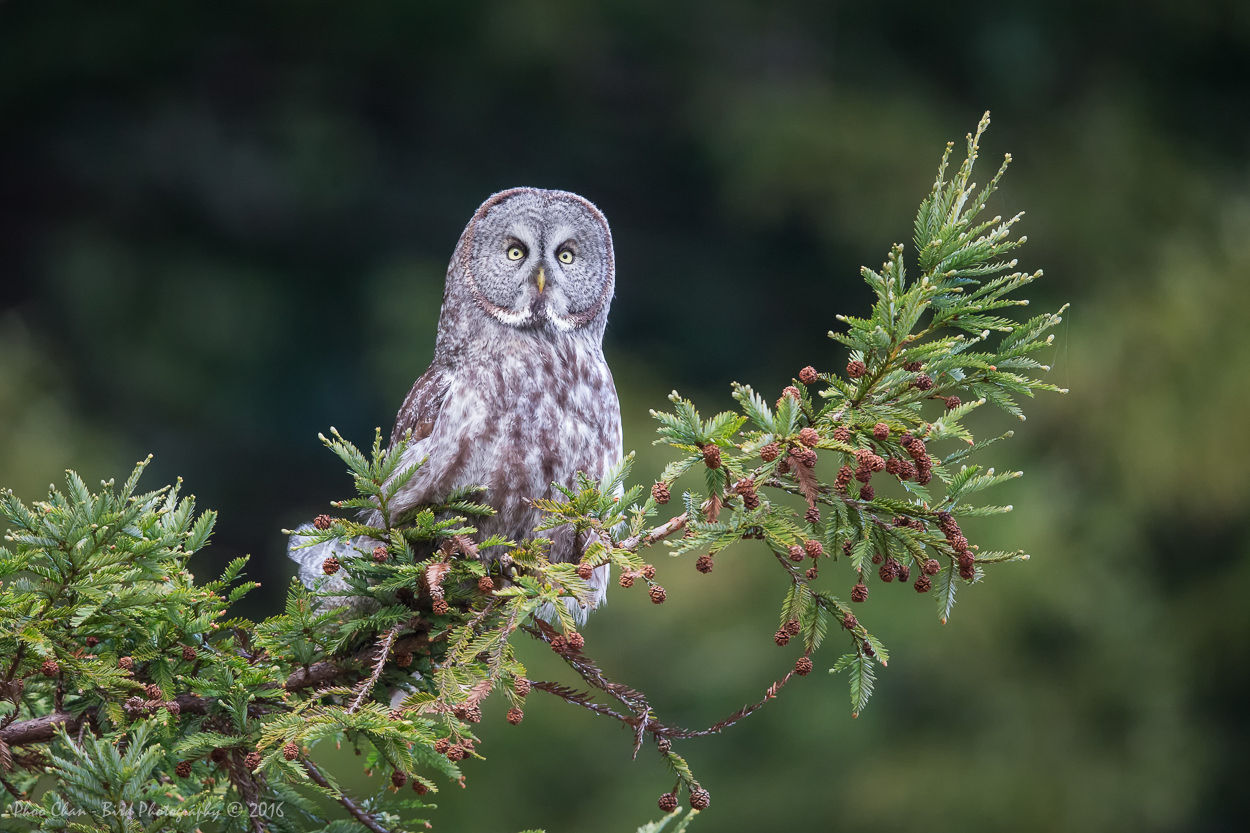 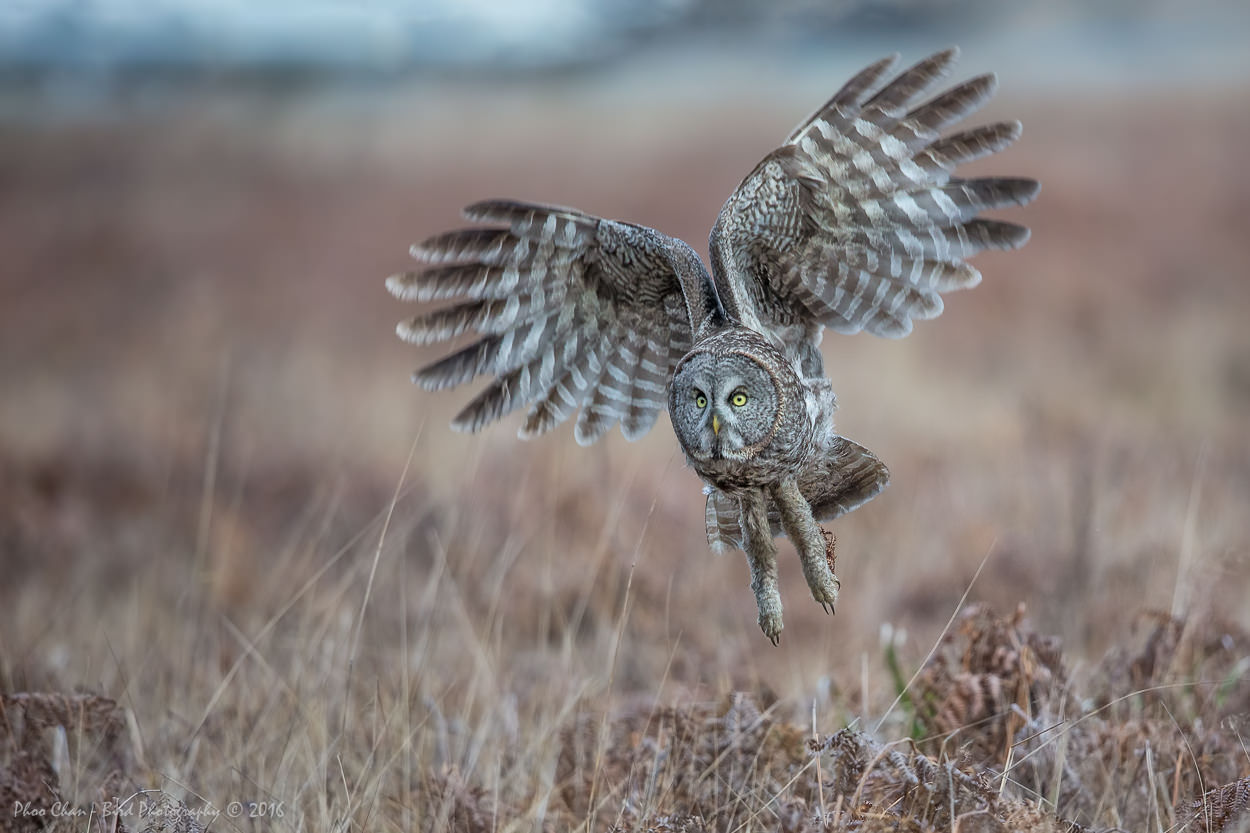 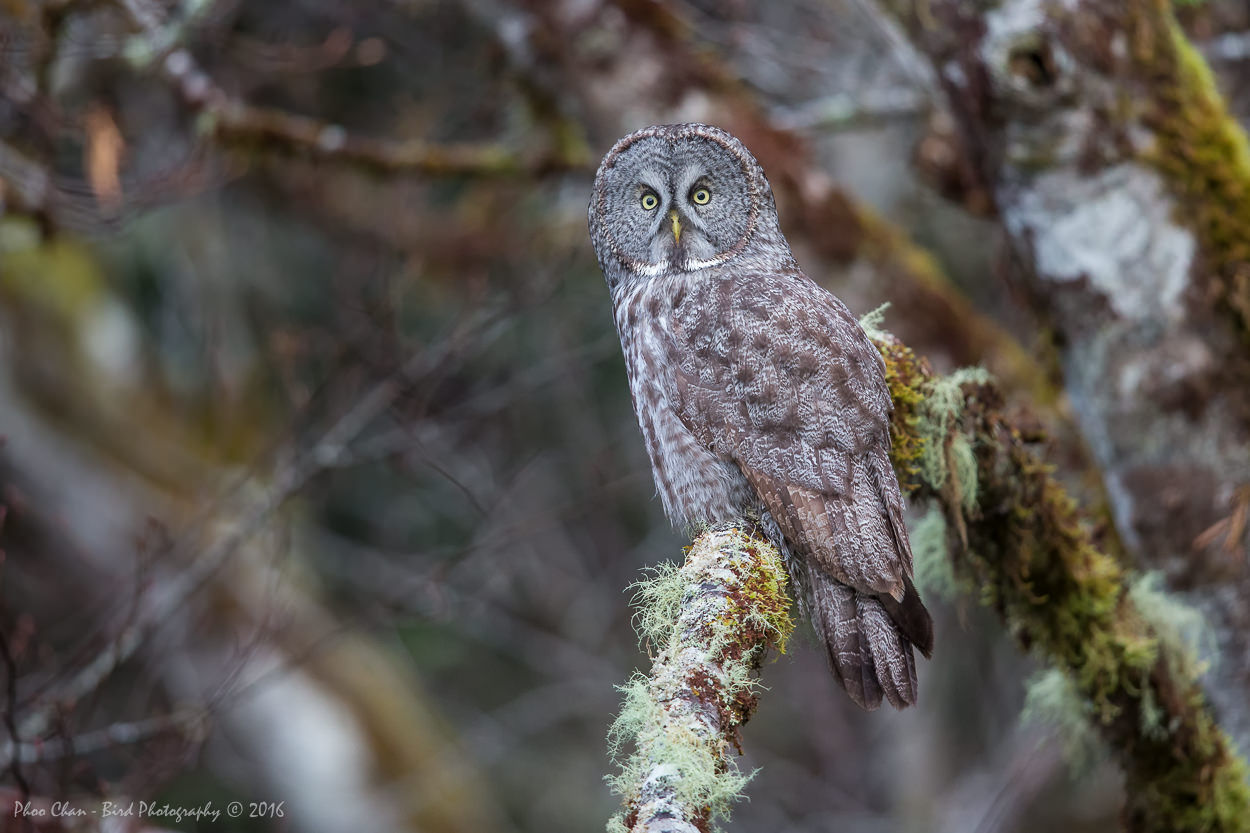 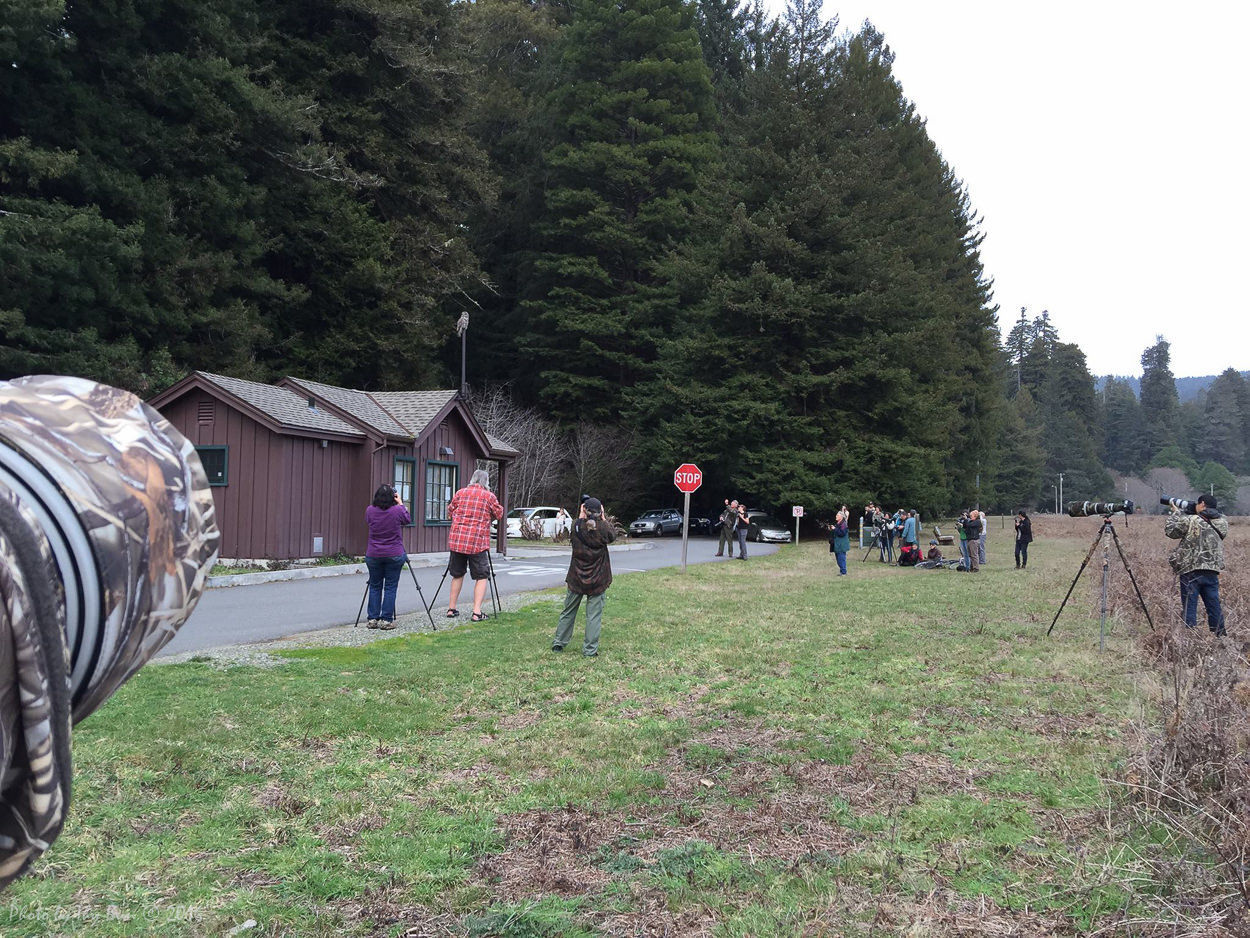 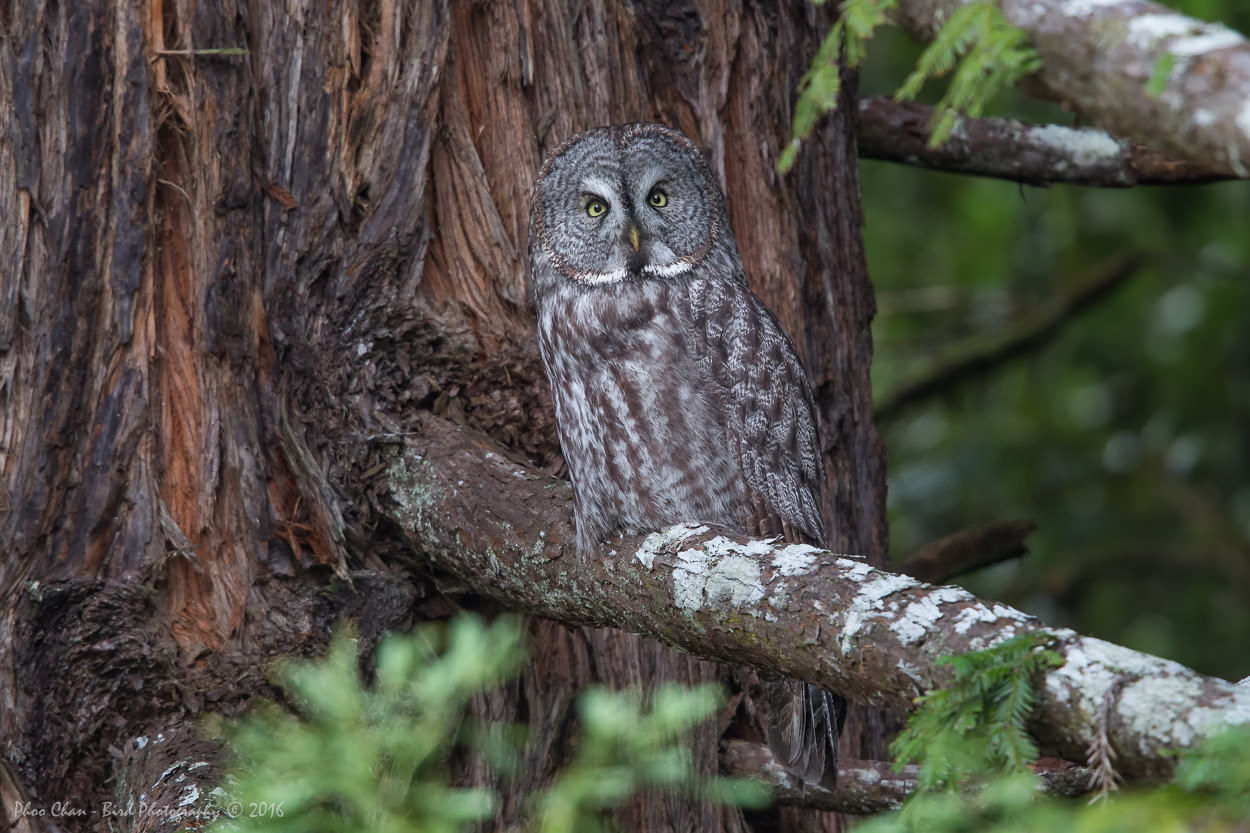 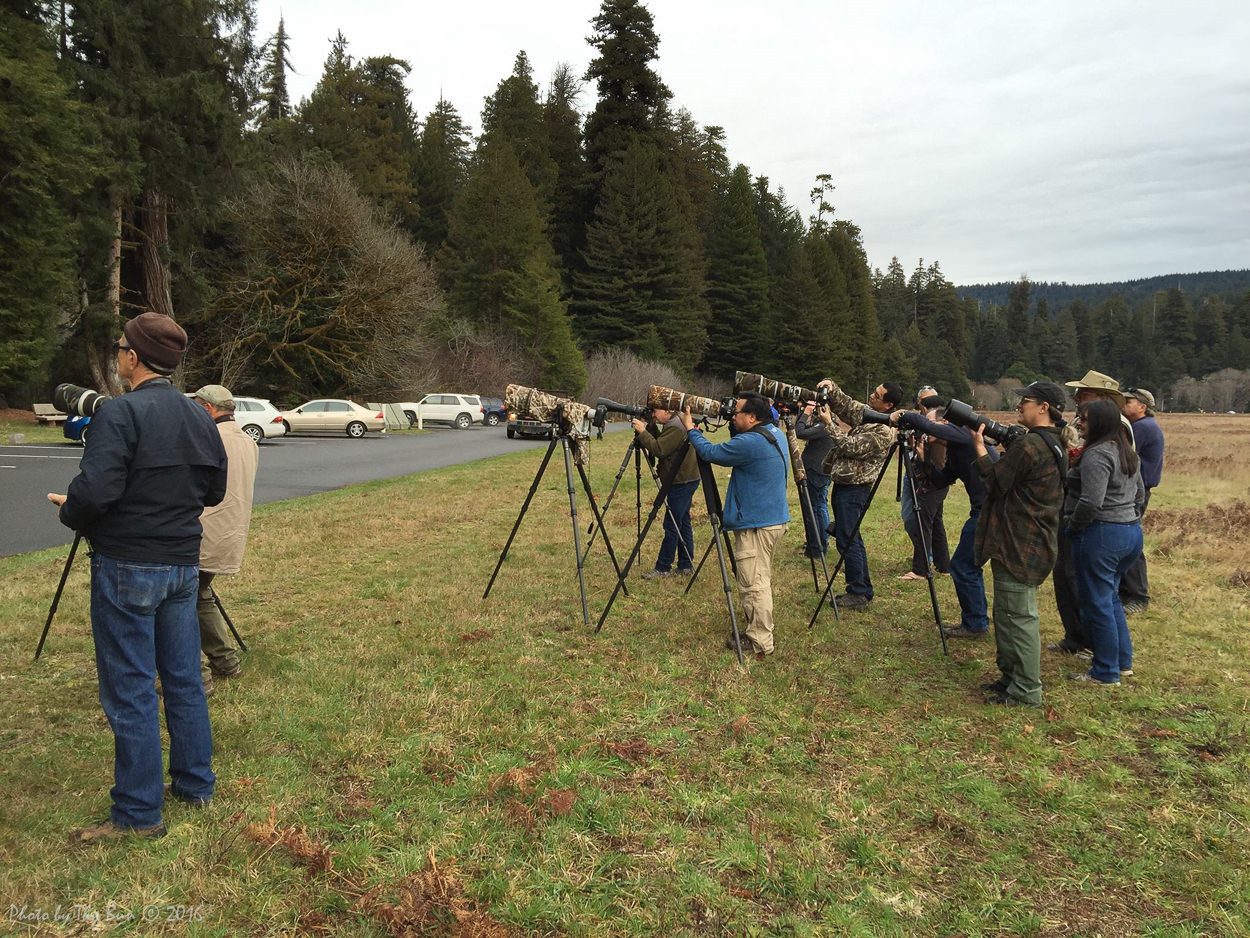 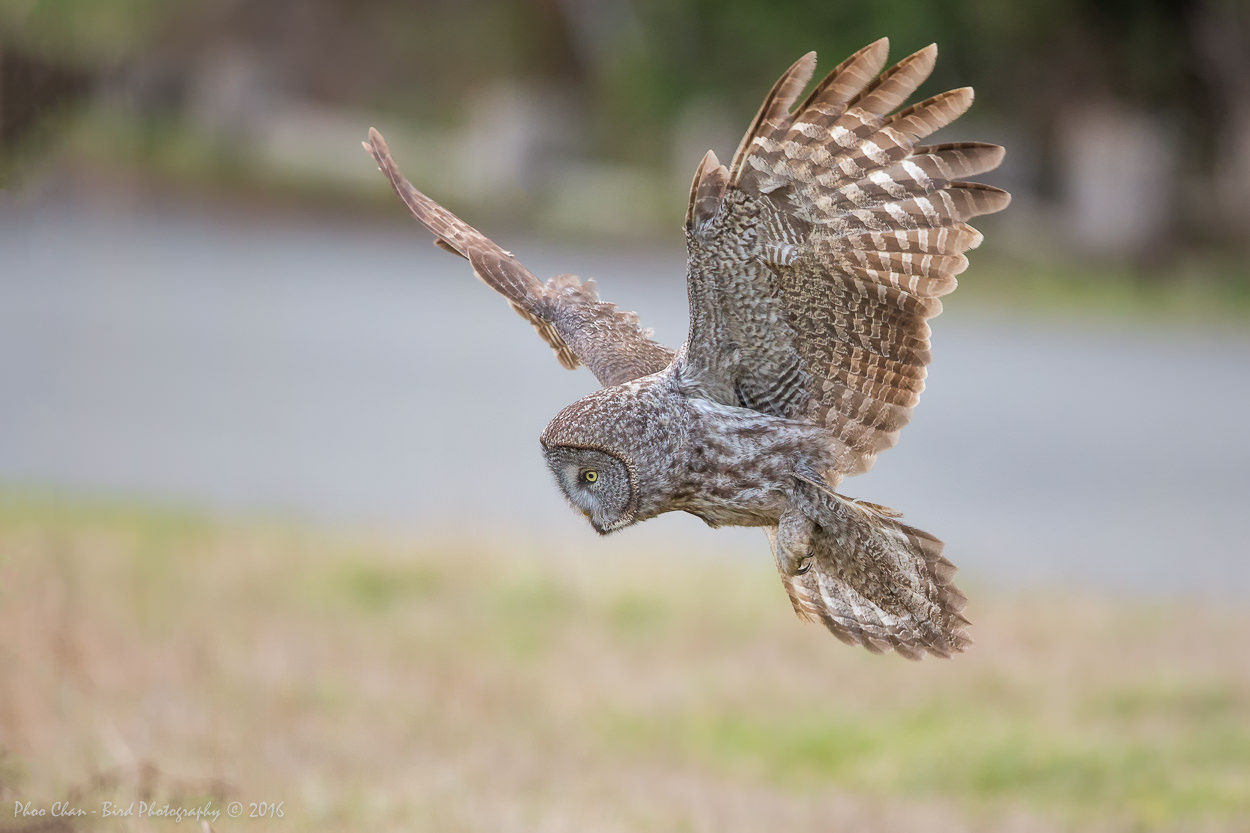 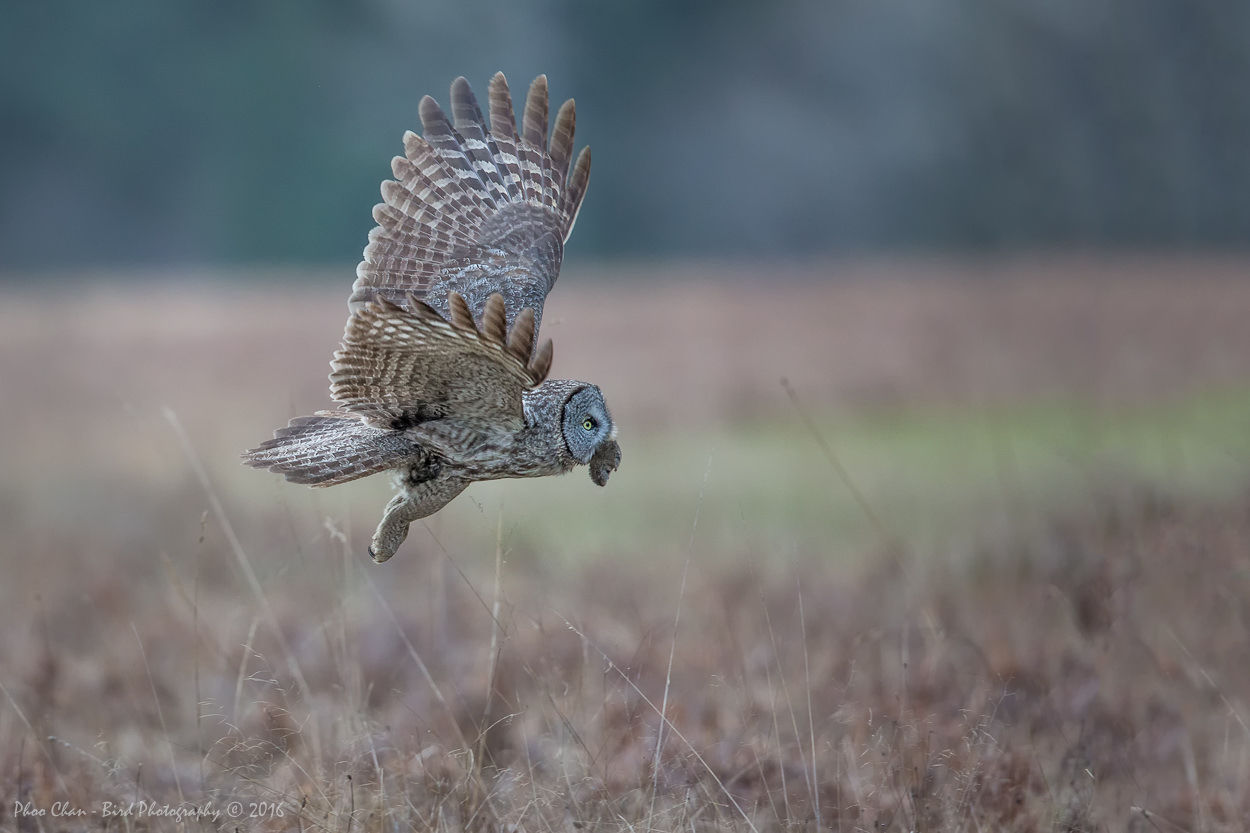 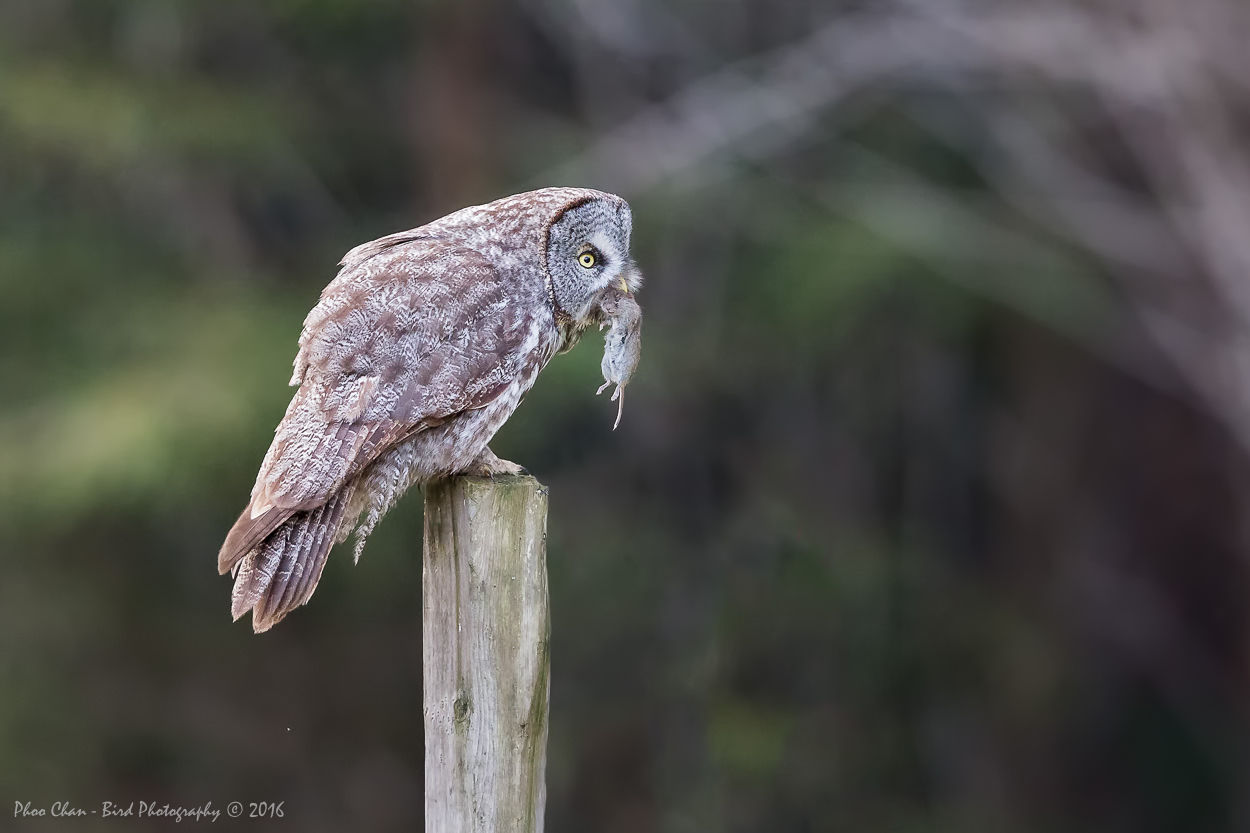 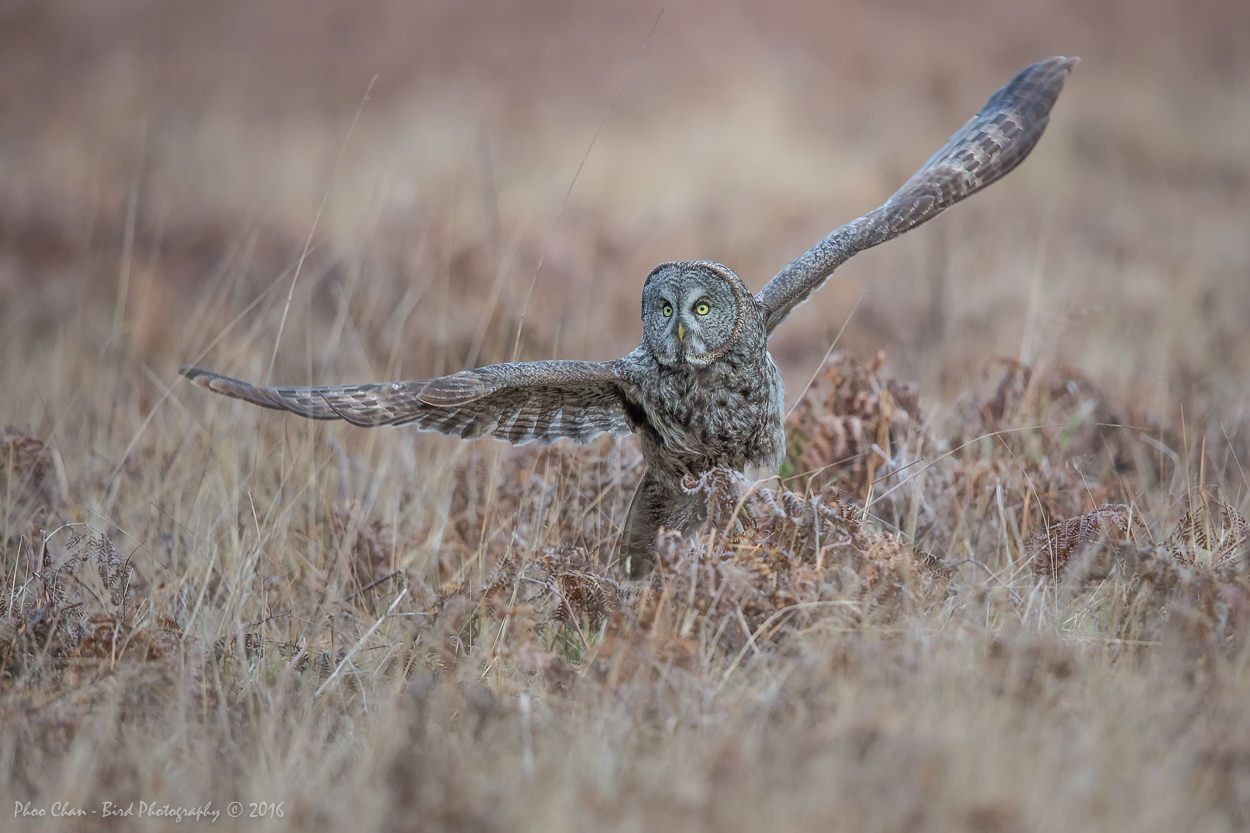 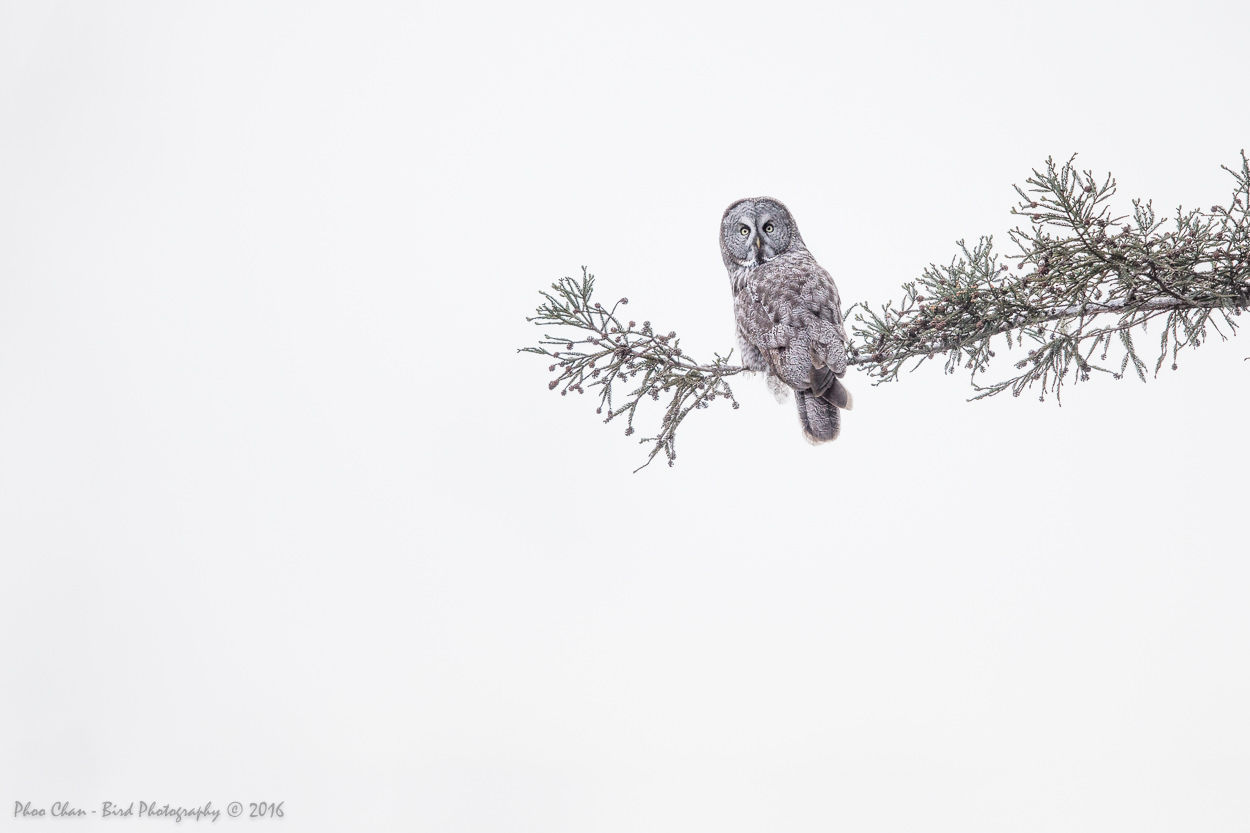 Perhaps it was the global warming that brought it to the Prairie Creek Redwoods State Park of Humboldt County but whatever the reason, it was certainly a pleasant welcome news for the first sighting of the Great Gray owl within the county’s border in 34 years.  It became an instant celebrity when flocks of photographers gathered around it. The owl didn’t feel intimated by the large numbers of people surrounding it and some even at such close proximity it feels that its privacy and space are violated. It took me over three weeks after the first sighting/report before I decided to join the bandwagon.  The 7-hour-drive each way alone was not very encouraging.  However, with so many good shots of the reported tamed juvenile owl flooding the internet, it raised my desire by the hour and only after I saw the crazy good full frame shot from my buddy Rick Evets that I decided to make a trip there one fine weekend. As the weekend approaching before my trip, there were reports that the owl was nowhere to be seen for the last 2 days which made us a bit worried but we decided to take a risk.  We left the Bay Area around midnight and reach Humboldt County at sunrise – thanks to our buddy Thy Bun for being our designated driver. It was not until 8am that Thy spotted the owl from a distance which was to our big relief even though we only managed to take a few perching snaps before it disappeared into the woods when spooked by a raven. After waited for over an hour the owl was spotted about two hundred yards from our location by a few birders.  This time it perched on one of the pine trees not too far away from the entrance kiosk. After over one hundred clicks, it wasn’t too much fun to shoot the same owl without any actions so we decided to venture out from the park heading for a Rough-legged Hawk after a birder shared the info with us. Unfortunately, we only got a glimpse of the hawk before it flew away so we headed back to the park for more owl shots.  Not much luck though, the owl was no longer at the perch. So we’re back at the waiting game thinking we should have not left the spot.  In the mean time, there was a very tame Red-headed Sapsucker posing for us to kill the time resulting in another few hundreds of shots. Then adrenaline rushed back into play when suddenly a little girl came to our rescue. She was so kind to run all the way to us saying she spotted the owl perching right next to the entrance kiosk. Sure enough it was there and stayed there for the next three hours or so before it was ready to hunt. We were told that was one of its favorite perch. When the owl made its leap from the perch, everyone got so excited. It made a few more hops from a tree branch to the pole on top of the kiosk and back to a branch before it finally decided to go for a hunt. It was amazing to witness how productive and effective the owl was at hunting. Despite the noise from the crowd, it managed to precisely pick up the exact location of a vole just by hearing the little noise made by the prey. Even though it failed on the first strike but it caught three voles in a row during the next subsequent dives. Amazingly, it chugged down the vole whole in less than three seconds. We left the park at around 6:00PM and reached home by midnight so all in all it was a round-the-clock-24-hour productive trip for us that this species is no longer up high on my bucket list. Luck was indeed with us as we’re fortunate enough to catch some action shots despite not spending more than a day like some of our friends from the Bay Area did. We may not have the best award winning shots but it was a great experience with this lifer. * Photog photos credit to Thy Bun