The red-winged blackbird (Agelaius phoeniceus) is a passerine bird of the family Icteridae found in most of North and much of Central America. It breeds from Alaska and Newfoundland south to Florida, the Gulf of Mexico, Mexico, and Guatemala, with isolated populations in western El Salvador, northwestern Honduras, and northwestern Costa Rica. It may winter as far north as Pennsylvania and British Columbia, but northern populations are generally migratory, moving south to Mexico and the southern United States. It can also be seen in NWT, Canada. Claims have been made that it is the most abundant living land bird in North America, as bird-counting censuses of wintering red-winged blackbirds sometimes show that loose flocks can number in an excess of a million birds per flock and the full number of breeding pairs across North and Central America may exceed 250 million in peak years. It also ranks among the best-studied wild bird species in the world. The red-winged blackbird is sexually dimorphic; the male is all black with a red shoulder and yellow wing bar, while the female is a nondescript dark brown. Seeds and insects make up the bulk of the red-winged blackbird’s diet.

The red-winged blackbird is one of 11 species in the genus Agelaius and is included in the family Icteridae, which is made up of passerine birds found in North and South America. The red-winged blackbird was originally described as Oriolus phoeniceus by Linnaeus in his 18th-century work, Systema Naturae, but was later moved with the other American blackbirds to the genus Agelaius (Vieillot, 1816). The genus name is Latin derived from Ancient Greek, agelaios, meaning “belonging to a flock”. The specific epithet, phoeniceus, is from the Latin word meaning “deep red”.

There are a number of subspecies, some of doubtful status, which are mostly quite similar in appearance, but the bicolored blackbird A. p. gubernator of California and central Mexico – two isolated populations – is distinctive: the male lacks the yellow wing patch of the nominate race, and the female is much darker than the female nominate. The taxonomy of this form is little understood, with the relationships between these two populations, and between them and red-winged blackbirds, still unclear. Despite the similar names, the red-winged blackbird is in a different family from the European redwing and the Old World common blackbird, which are thrushes (Turdidae).

Young birds resemble the female, but are paler below and have buff feather fringes. Both sexes have a sharply pointed bill. The tail is of medium length and is rounded. The eyes, bill, and feet are all black.

The male is unmistakable except in the far west of the US, where the tricolored blackbird occurs. Males of that species have a darker red epaulet edged with white, not yellow. Females of tricolored, bicolored, red-shouldered and red-winged blackbirds can be difficult to identify in areas where more than one form occurs. In flight, when the field marks are not easily seen, red-winged can be distinguished from less closely related Icterids such as common grackle and brown-headed cowbird by its different silhouette and undulating flight. 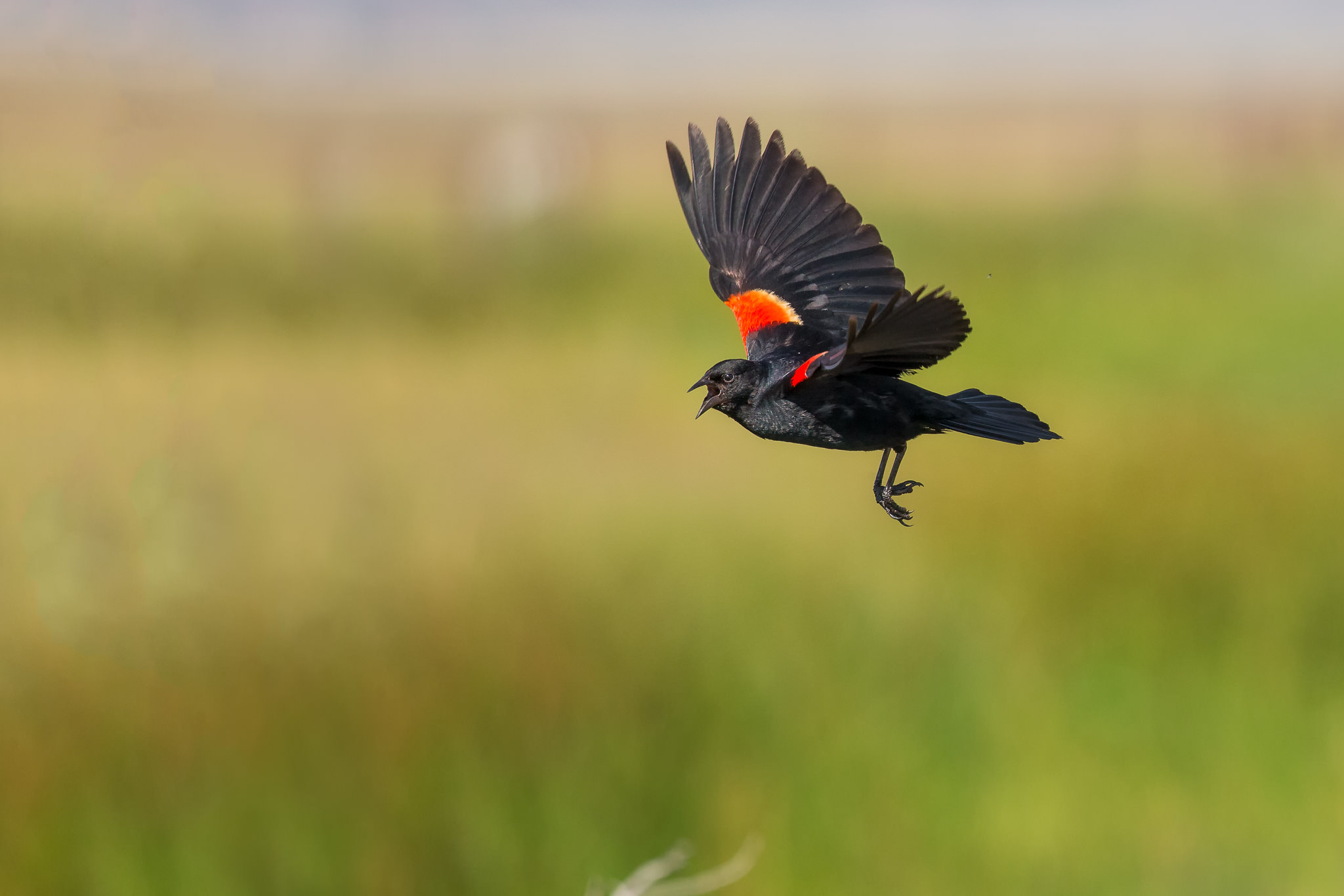 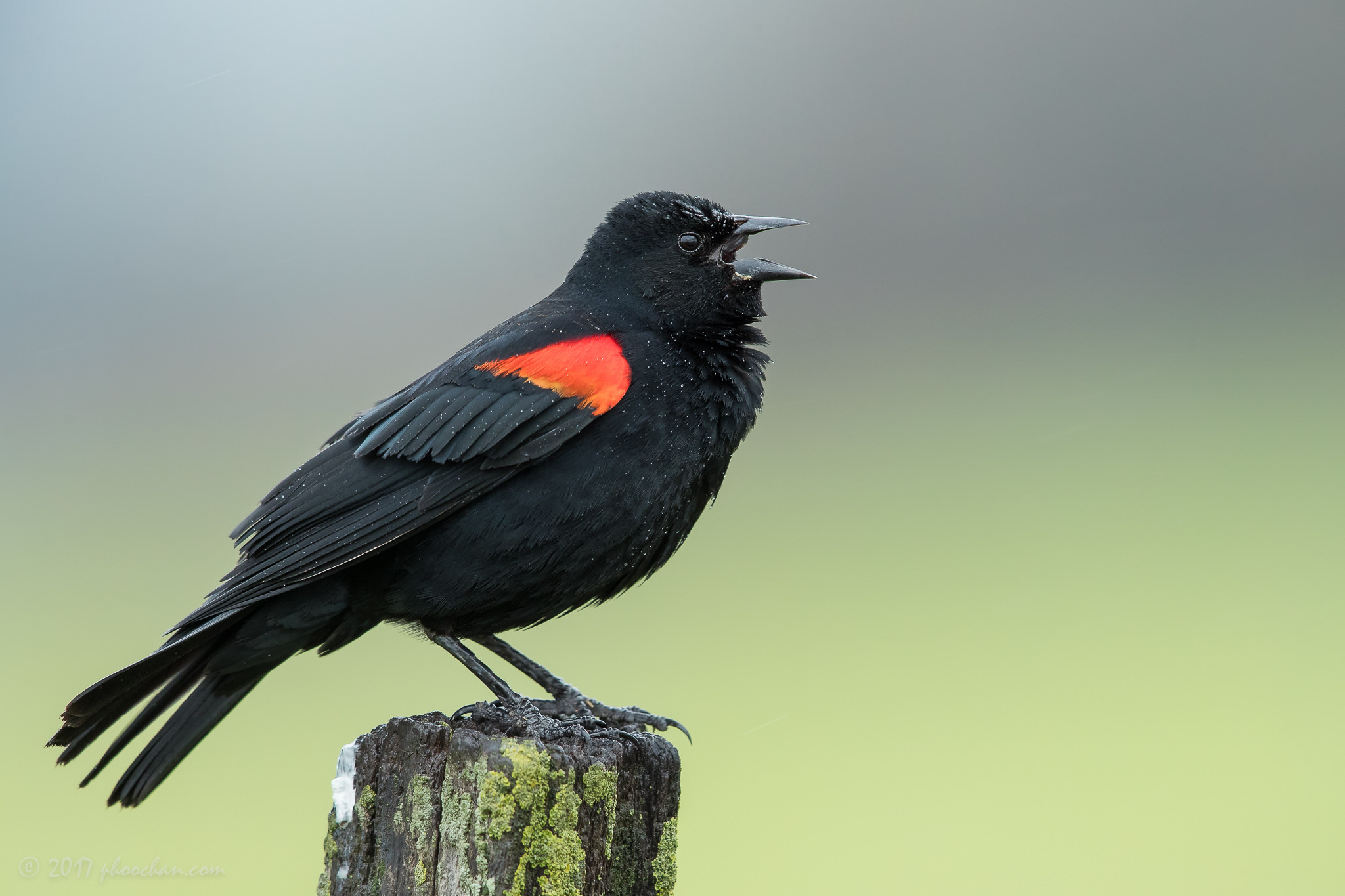