Adults are 15–17 cm in overall length (nearly 6 inches) and are gray, brownish-gray or rufous in color. This owl has a round white spotted head, weakly defined facial disc, and dark upper breast, wings and tail, the latter quite long compared to other owls. The eyes are yellow and the bill is yellowish-green. The bird has two black nape spots outlined in white on the back of its head, which look like eyes. The mid to lower breast is white with darker vertical streaking. Legs are feathered down to the four well-armed toes on each foot. Northern Pygmy-Owls are diurnal and hunt by day, making them easier to see than many owls, especially when they perch on tops of conifer trees. They eat mainly small birds, which they sometimes hunt at bird feeders. They fly in an undulating pattern, like a woodpecker.

Northern Pygmy-Owls, although not much larger than House Sparrows, sometimes take prey up to three times their own size, such as Northern Bobwhite, Northern Flicker, and even chickens!

When they find extra food, Northern Pygmy-Owls often cache their prey in tree cavities, or by hanging the prey on thorns, as shrikes are famous for doing.

They usually nest in a tree cavity and will often use old woodpecker holes. The female lays 2–7 eggs, typically 4–6. Nest tree species may include Douglas fir, western redcedar, western hemlock and red alder. Early in the breeding cycle males establish and defend a territory of perhaps 250 hectares (about 1 sq. mi.).

During the breeding cycle the female incubates the eggs, broods the young and guards the nest. The male hunts, making food deliveries approximately every 2 hours. The male must feed his mate, the young (typically 5) and himself. The male hunts from dawn to dusk as the young near fledging, and during the first weeks after they leave the nest.

The young leave the nest (fledge) by making an initial flight that may be a short hop to a nearby branch, or an explosive burst into an adjacent tree where they land by grasping whatever branch is first contacted, sometimes clinging upside-down. Owls at this stage are sometimes called “branchers” for their clinging, dangling and climbing behaviors. The second day after fledging, the young gradually climb and fly upward into the forest canopy, where they spend their first few weeks, at times perched “shoulder-to-shoulder” with their siblings, begging for food.

Despite many statements in popular literature, no reliable information exists on the seasonal movements of this species. It is not known whether these pygmy-owls maintain the same territory or same mate year to year, though these questions are being investigated. Dispersal of young and influences on their mortality are also poorly known, though barred owls and spotted owls are known to prey on pygmy owls.

Pygmy owls are purportedly “sit-and-wait” predators, though they in fact hunt somewhat actively, moving from perch to perch with short flights, and pursuing prey at all levels of forest structure. They swoop down on prey; they may also catch insects in flight. They eat small mammals, birds and large insects, and may take a variety of other vertebrates and invertebrates. Mountain pygmy owls occasionally take prey species the same size or larger than themselves (e.g. California quail); however, small to medium-sized birds and small mammals are the norm. They’ve been observed eating Wilson’s warblers. 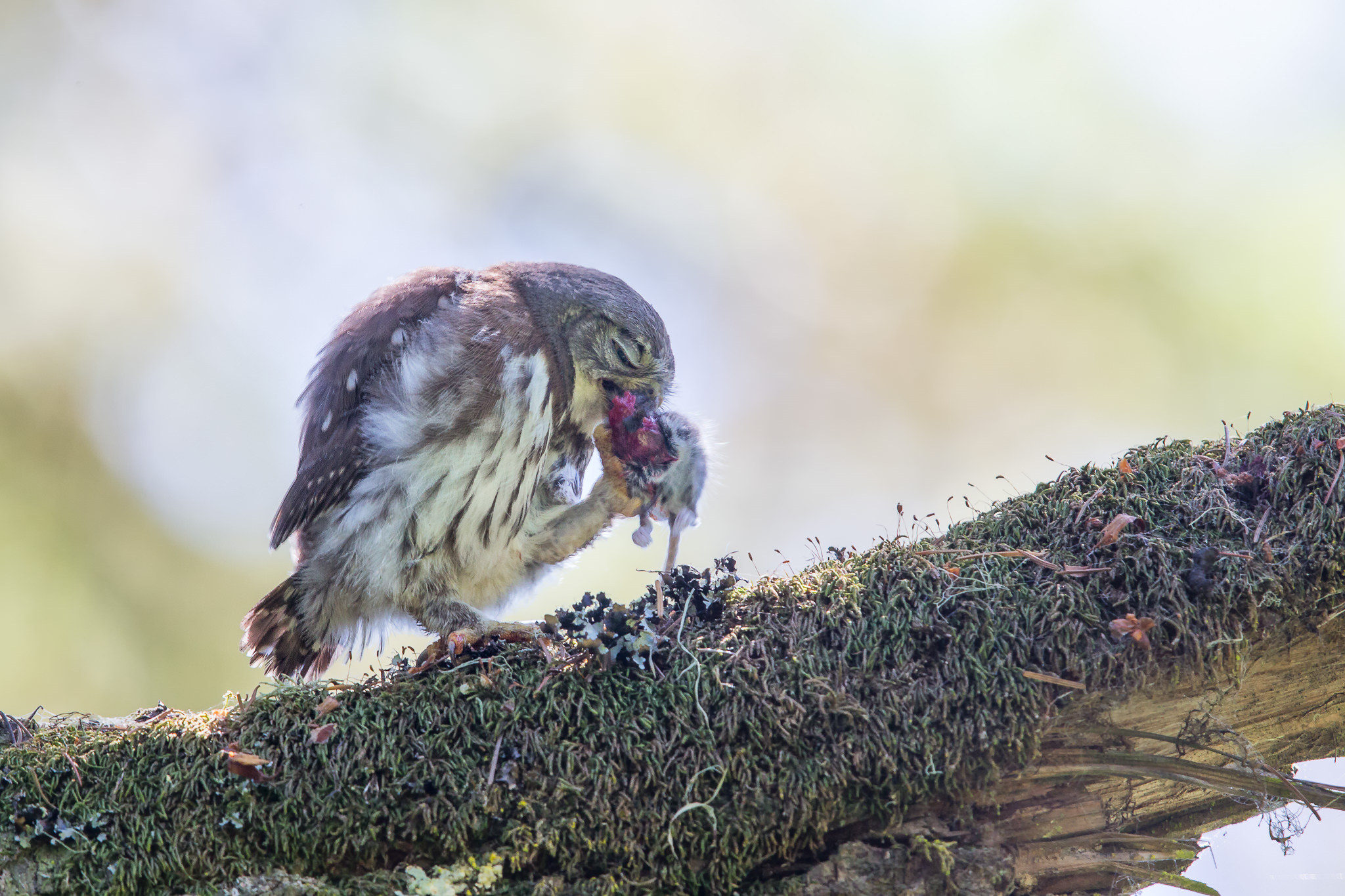 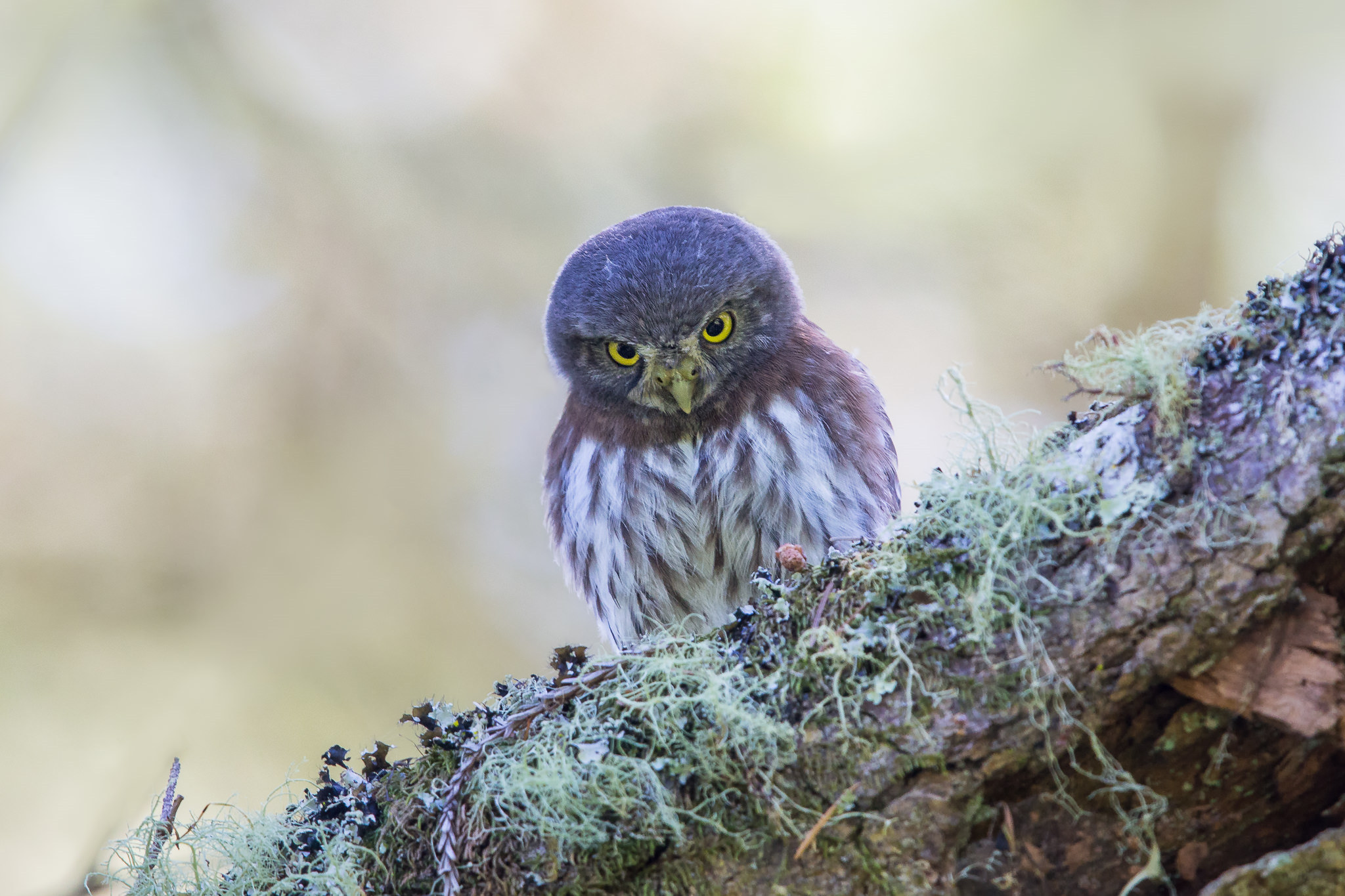 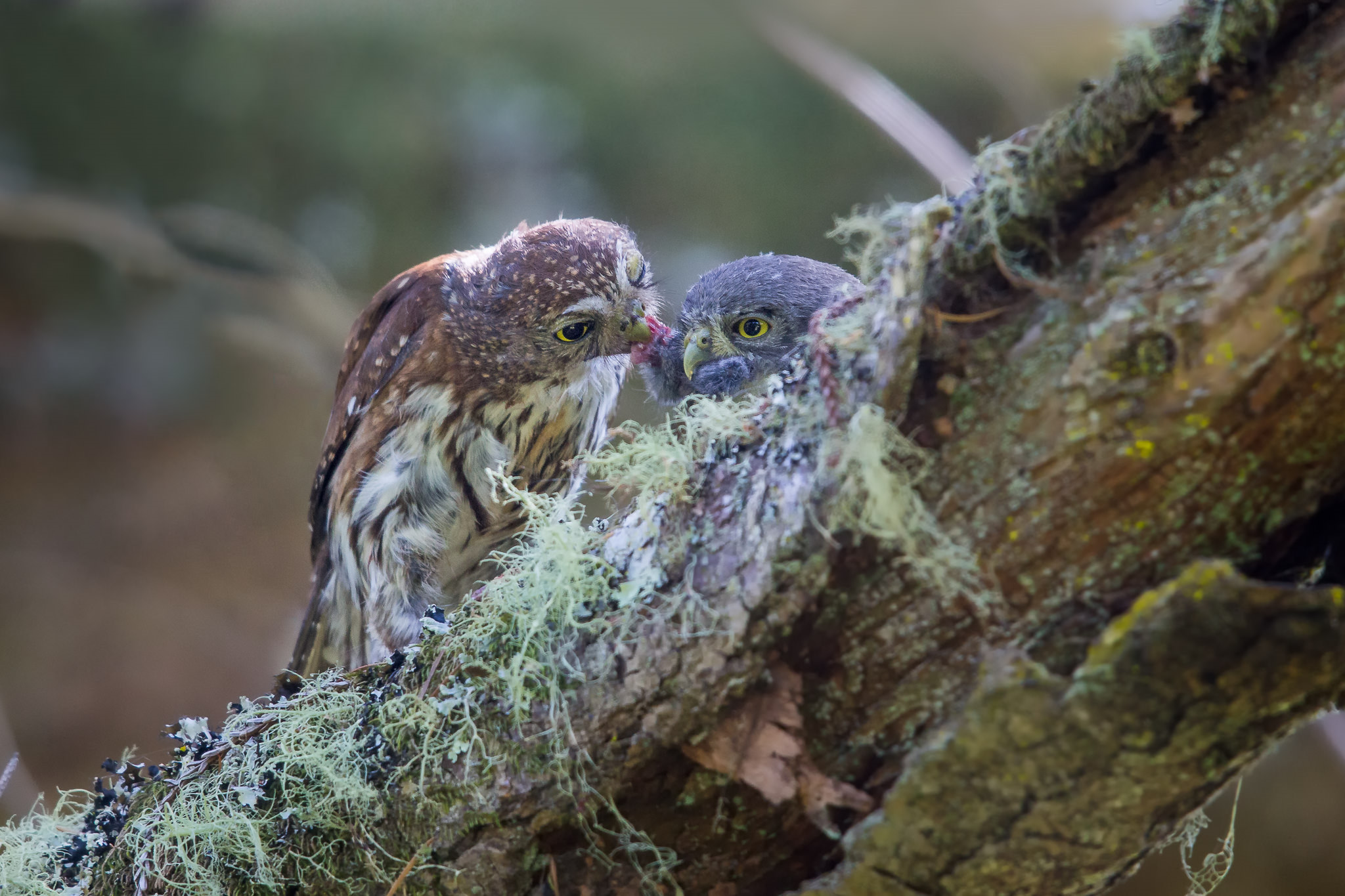 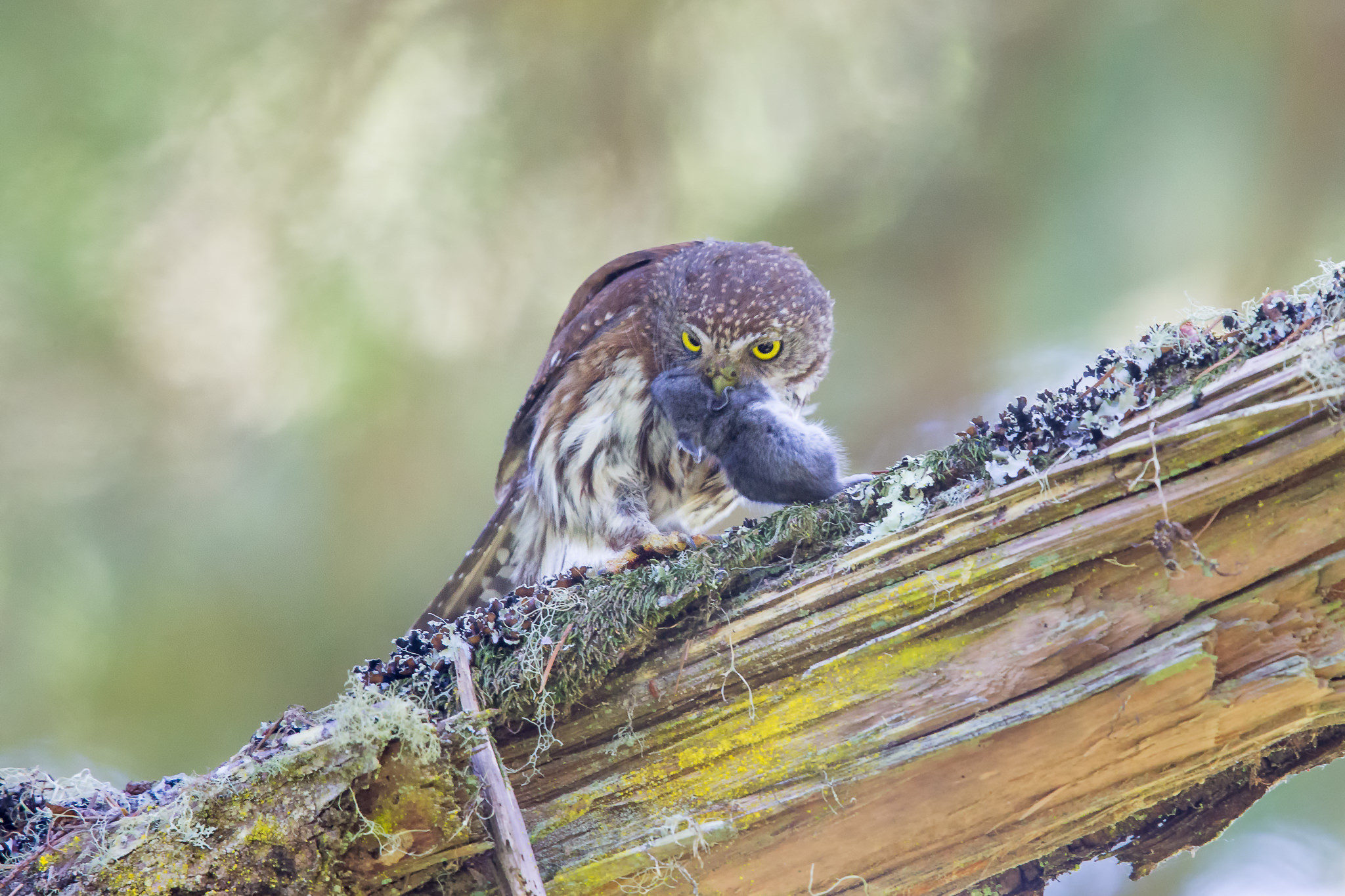 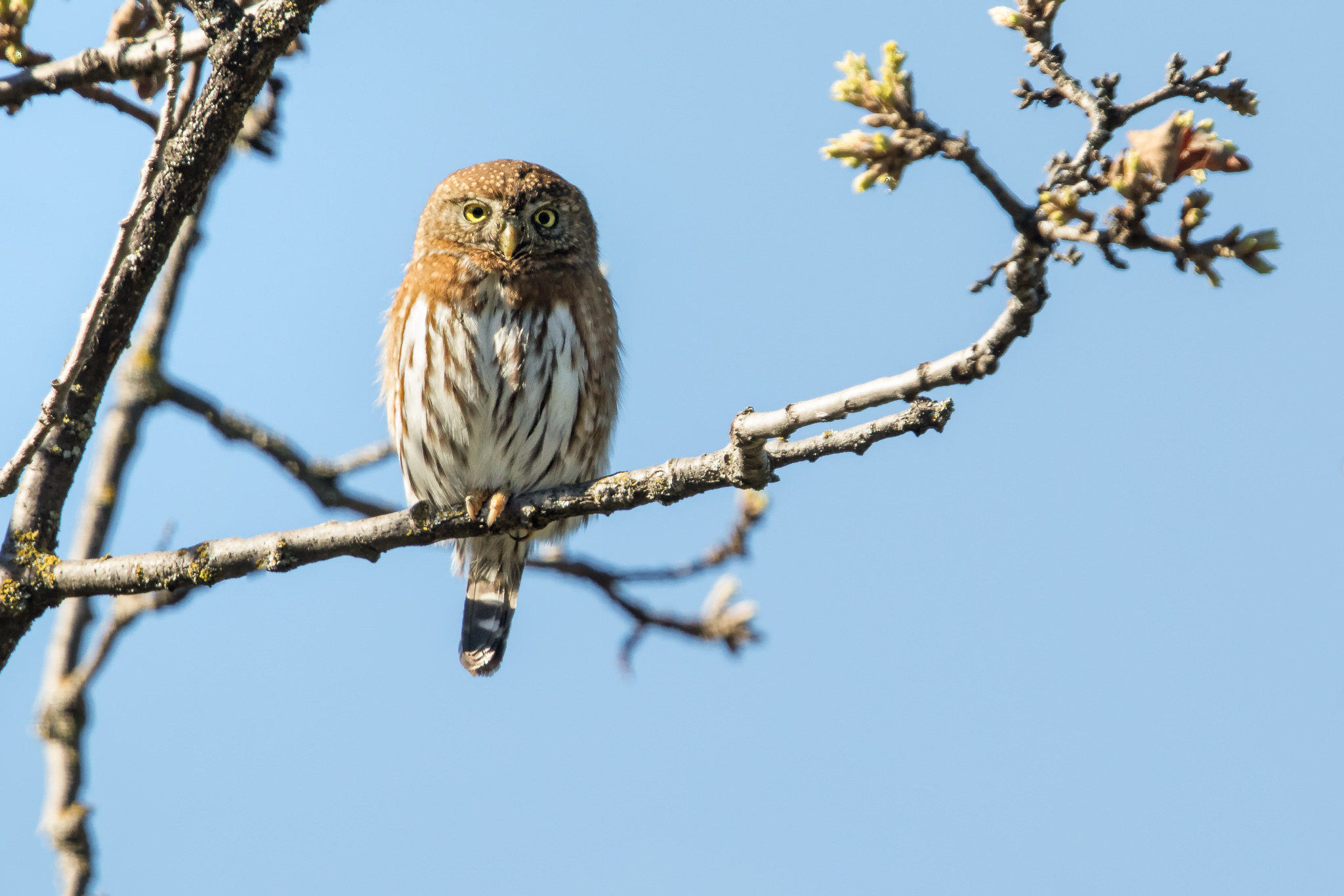