Unlike most owls, Snowy Owls are diurnal, extremely so. They’ll hunt at all hours during the continuous daylight of an Arctic summer. And they may eat more than 1,600 lemmings in a single year.
Snowy owls are native to Arctic regions in North America and Eurasia. Younger snowy owls start with darker plumage, which turns lighter as they get older. Males are almost all white, while females have more flecks of gray plumage.

The snowy owl was one of the many bird species originally described by Linnaeus in the landmark 1758 10th edition of his Systema Naturae, where it was given the binomial name of Strix scandiaca. Until recently, it was regarded as the sole member of a distinct genus, as Nyctea scandiaca, but mtDNA cytochrome b sequence data (Olsen et al. 2002) shows that it is very closely related to the horned owls in the genus Bubo. However, some authorities debate this classification, still preferring Nyctea.

This yellow-eyed, black-beaked white bird is easily recognizable. It is 52–71 cm (20–28 in) long, with a 125–150 cm (49–59 in) wingspan. Also, these owls can weigh anywhere from 1.6 to 3 kg (3.5 to 6.6 lb). The average lifespan in the wild is 9.5 years. It is one of the largest species of owl and, in North America, is on average the heaviest owl species. The adult male is virtually pure white, but females and young birds have some dark spots; the young are heavily barred, and dark spotting may even predominate. Its thick plumage, heavily feathered taloned feet, and colouration render the snowy owl well-adapted for life north of the Arctic Circle.

Snowy owl calls are varied, but the alarm call is a barking, almost quacking krek-krek; the female also has a softer mewling pyee-pyee or prek-prek. The song is a deep repeated gahw. They may also clap their beak in response to threats or annoyances. While called clapping, it is believed this sound may actually be a clicking of the tongue, not the beak.

The snowy owl is typically found in the northern circumpolar region, where it makes its summer home north of latitude 60° north. However, it is a particularly nomadic bird, and because population fluctuations in its prey species can force it to relocate, it has been known to breed at more southerly latitudes. During the last glacial, there was a Central Europe Bubo scandiacus gallicus, but no modern subspecies are recognized.

This species of owl nests on the ground, building a scrape on top of a mound or boulder. A site with good visibility is chosen, such as the top of a mound with ready access to hunting areas and a lack of snow. Gravel bars and abandoned eagle nests may be used. The female scrapes a small hollow before laying the eggs. Breeding occurs in May to June, and depending on the amount of prey available, clutch sizes range from 3 to 11 eggs, which are laid singly, approximately every other day over the course of several days. Hatching takes place approximately five weeks after laying, and the pure white young are cared for by both parents. Although the young hatch asynchronously, with the largest in the brood sometimes 10 to 15 times as heavy as the smallest, there is little sibling conflict and no evidence of siblicide. Both the male and the female defend the nest and their young from predators, sometimes by distraction displays. Males may mate with two females that may nest about a kilometer apart. Some individuals stay on the breeding grounds while others migrate. 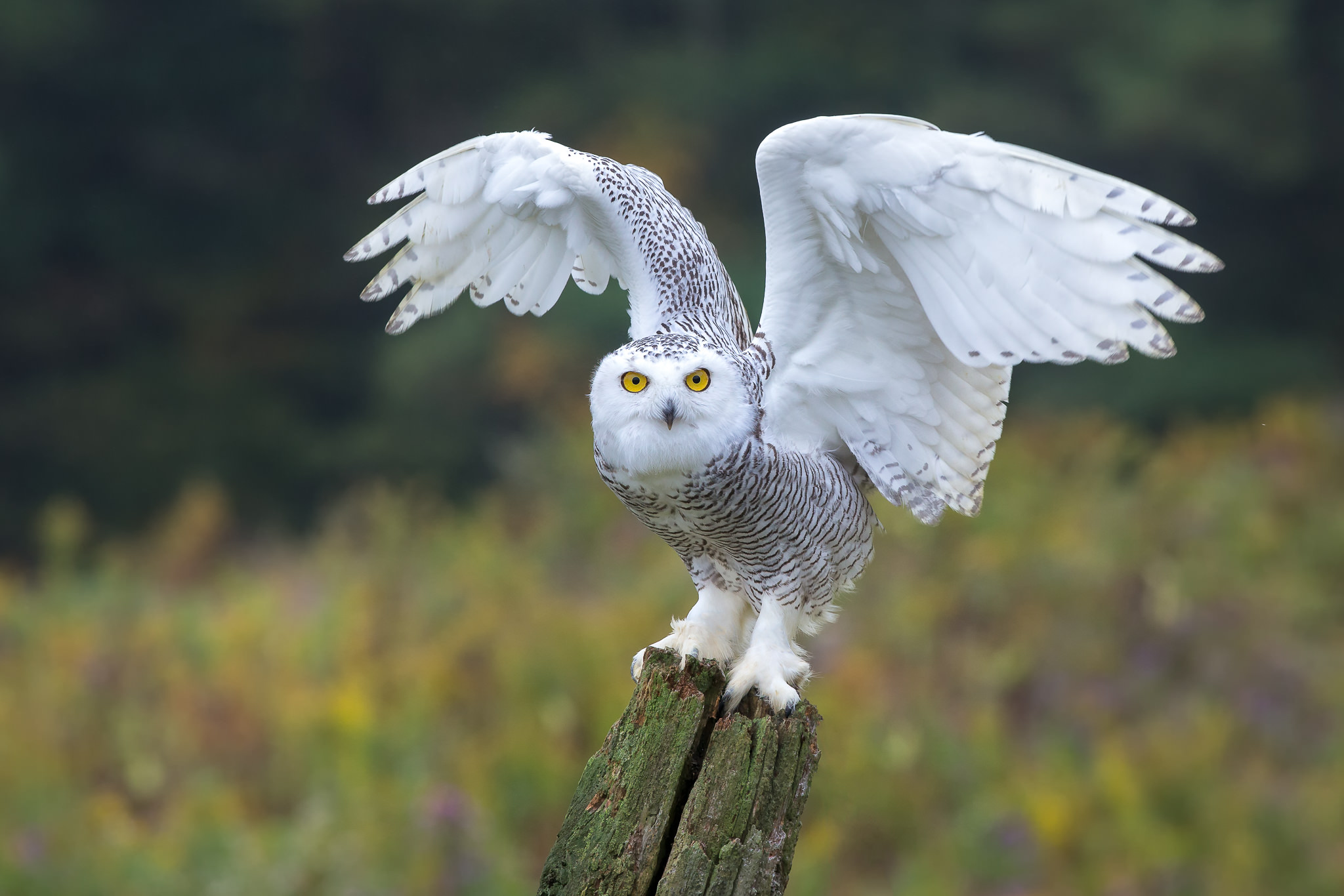 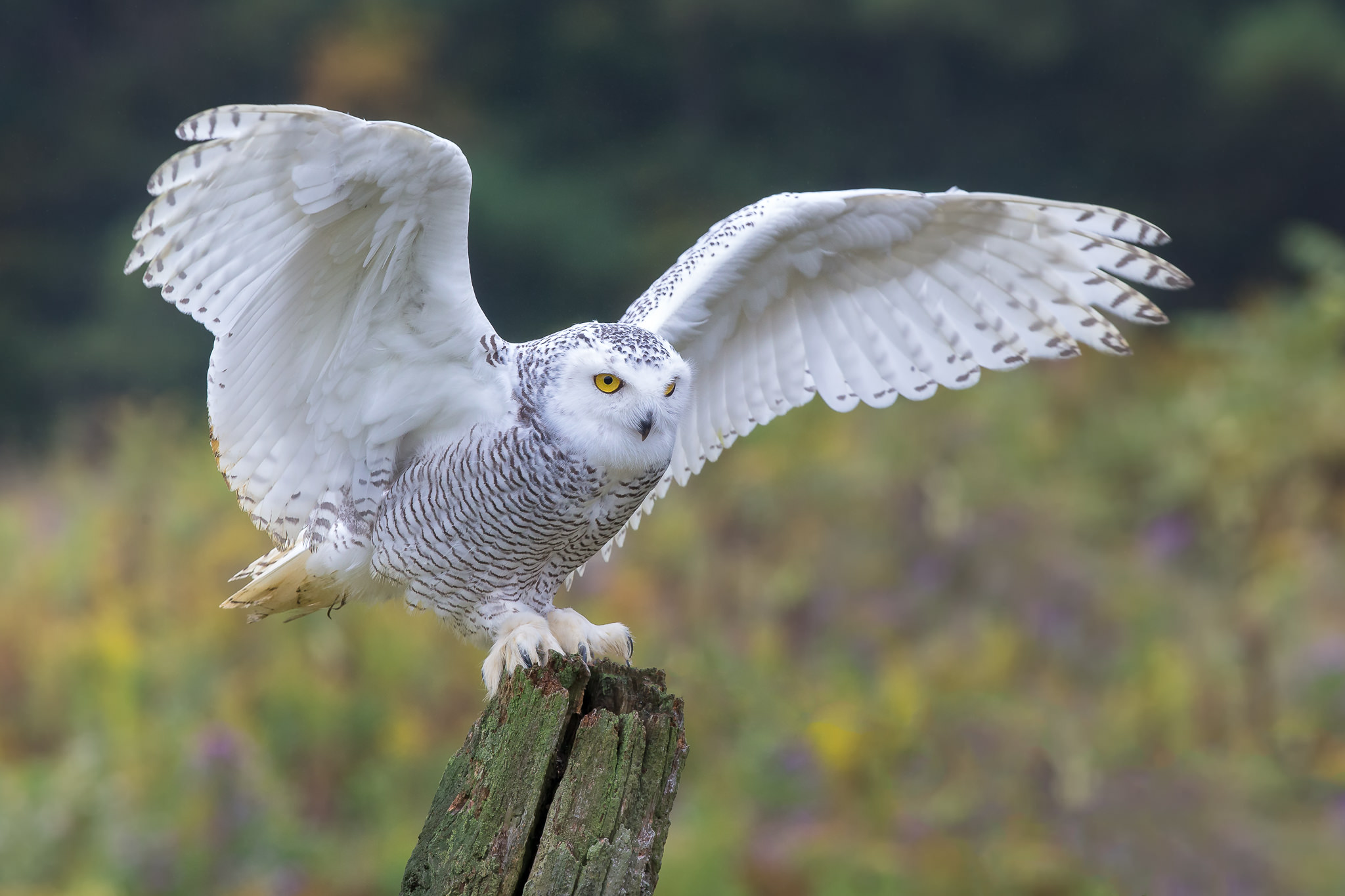 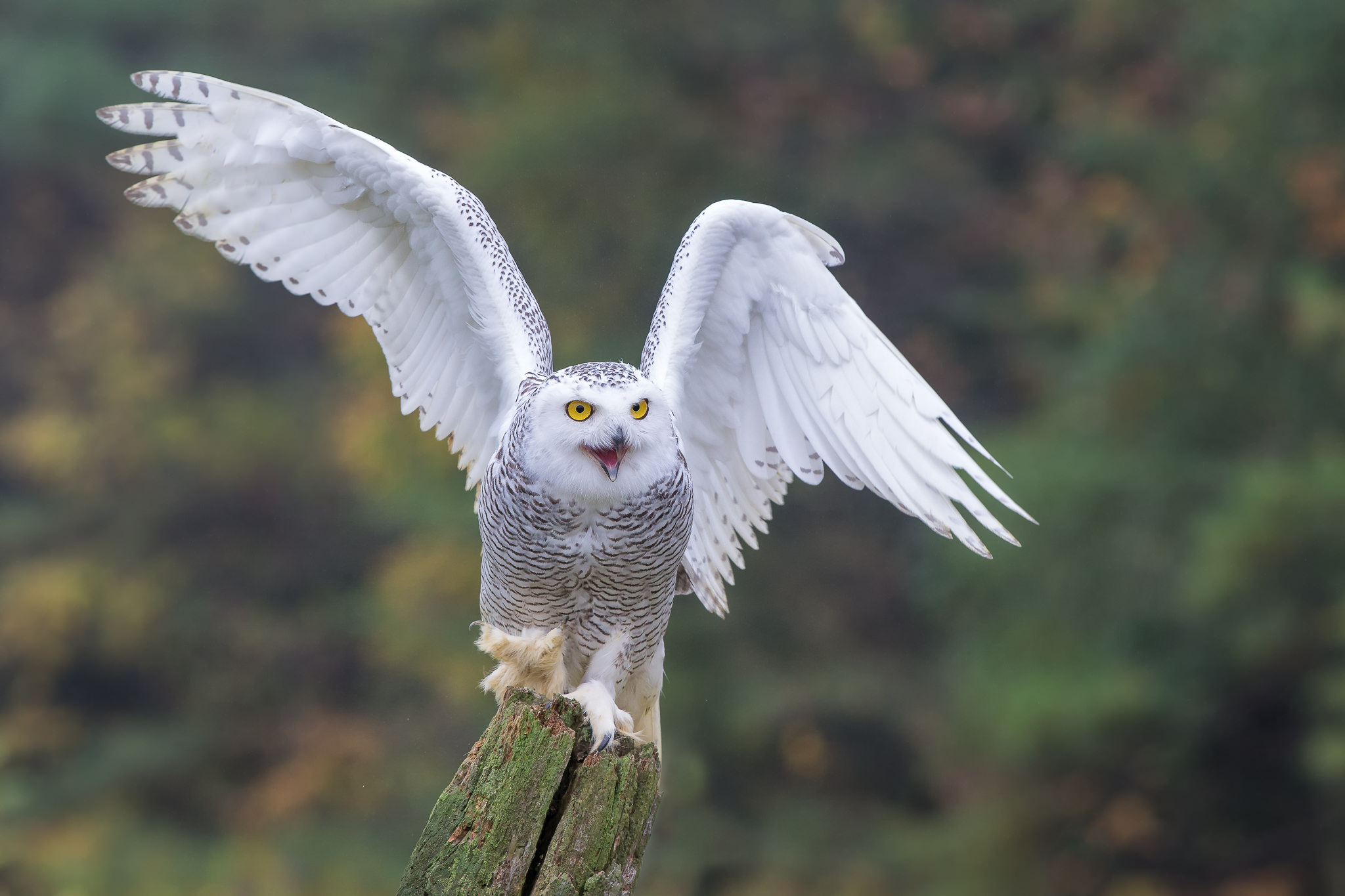 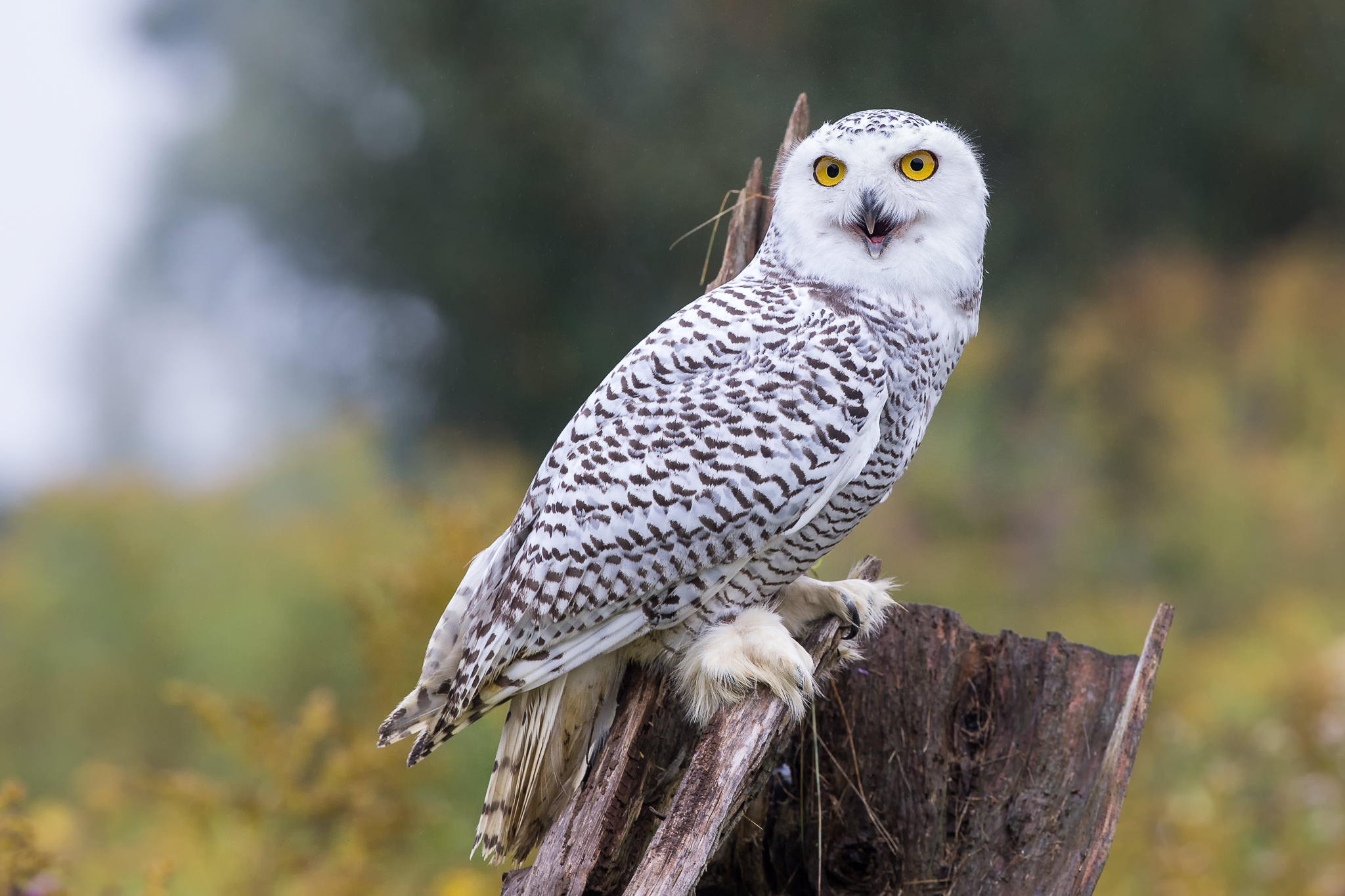 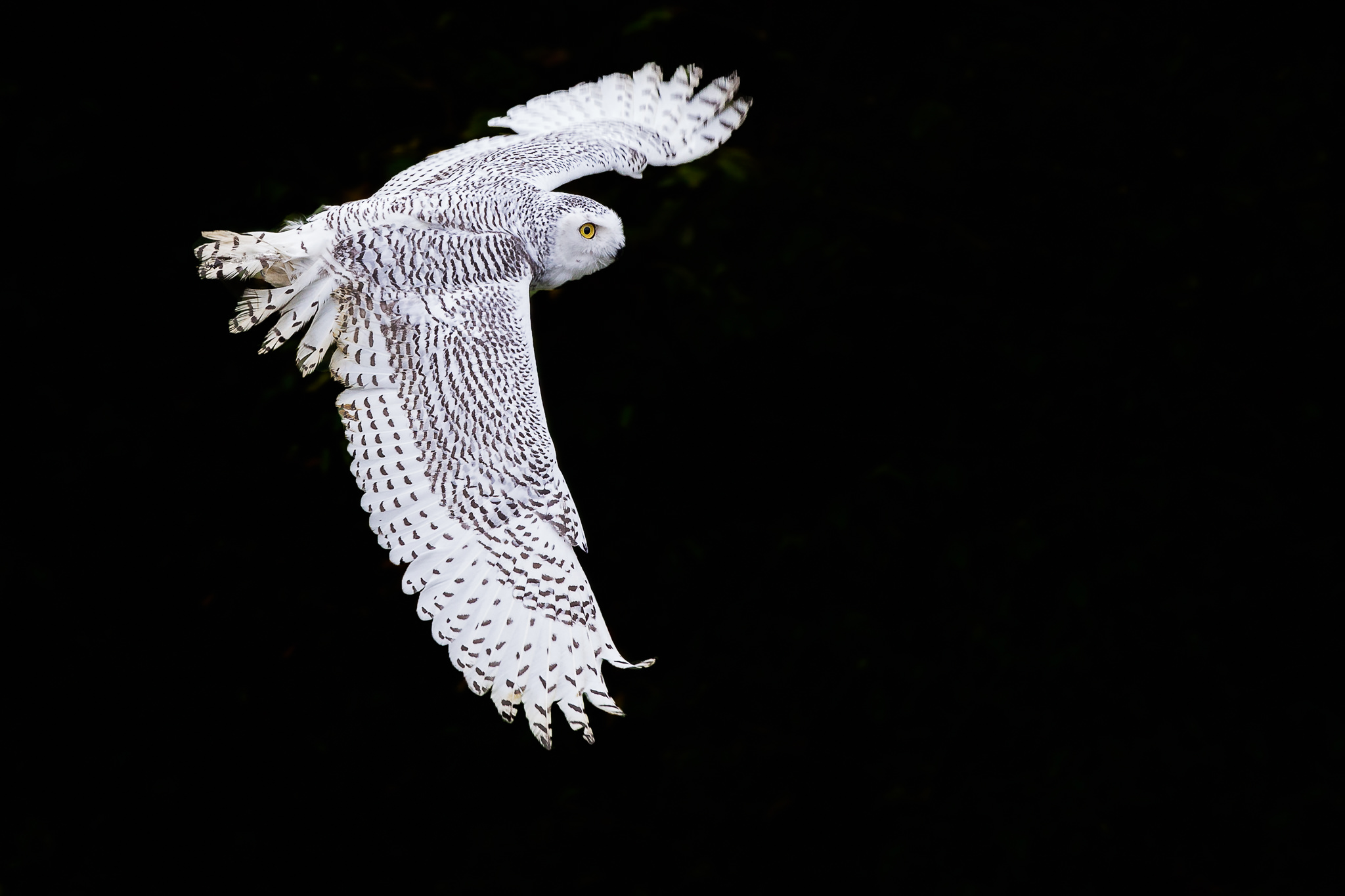