A phalarope is any of three living species of slender-necked shorebirds in the genus Phalaropus of the bird family Scolopacidae. The English and genus names come through French phalarope and scientific Latin Phalaropus from Ancient Greek phalaris, “coot”, and pous, “foot”. Coots and phalaropes both have lobed toes.

Phalaropes are close relatives of the shanks and tattlers, the Actitis and Terek sandpipers, and also of the turnstones and calidrids. They are especially notable for two things: their unusual nesting behavior, and their unique feeding technique.

Two species, the red phalarope (Phalaropus fulicarius, called grey phalarope in Europe) and red-necked phalarope (P. lobatus) breed around the Arctic Circle and winter on tropical oceans. Wilson’s phalarope (P. tricolor) breeds in western North America and migrates to South America. All are 6–10 in (15–25 cm) in length, with lobed toes and a straight, slender bill. Predominantly grey and white in winter, their plumage develops reddish markings in summer.

A fossil species, Phalaropus elenorae, is known from the Middle Pliocene 4–3 million years ago (mya). A coracoid fragment from the Late Oligocene (c. 23 mya) near Créchy, France, was also ascribed to a primitive phalarope; it might belong to an early species of the present genus or a prehistoric relative. The divergence of phalaropes from their closest relatives can be dated to around that time, as evidenced by the fossil record (chiefly of the shanks) and supported by tentative DNA sequence data. It is notable that the last remains of the Turgai Sea disappeared around then, and given the distribution of their fossil species it is quite plausible that this process played a major role in separating the lineages of the shank-phalarope clade.

Ecology and behavior
Red and red-necked phalaropes are unusual amongst shorebirds in that they are considered pelagic, that is, they spend a great deal of their lives outside the breeding season well out to sea. Phalaropes are unusually halophilic (salt-loving) and feed in great numbers in saline lakes such as Mono Lake in California and the Great Salt Lake of Utah.

Feeding
When feeding, a phalarope will often swim in a small, rapid circle, forming a small whirlpool. This behavior is thought to aid feeding by raising food from the bottom of shallow water. The bird will reach into the center of the vortex with its bill, plucking small insects or crustaceans caught up therein.

It has been shown that phalaropes use the surface tension of water to capture food particles and get them to move up along the bill and into their mouths.

Sexual dimorphism and reproduction
The sexual dimorphism and contribution to parenting are reversed in the three phalarope species. Females are larger and more brightly colored than males. The females pursue and fight over males, then defend them from other females until the male begins incubation of the clutch. Males perform all incubation and chick care, while the female attempts to find another male to mate with. If a male loses his eggs to predation, he will often rejoin his original mate or a new female, who will lay another clutch. Once it becomes too late in the season to start new nests, females begin their southward migration, leaving the males to incubate the eggs and care for the young. Phalaropes are uncommon among birds and vertebrates in general in that they engage in polyandry, one female taking multiple male mates while males mate with only one female. Specifically, phalaropes engage in serial polyandry, wherein females pair with multiple males at different times in the breeding season. 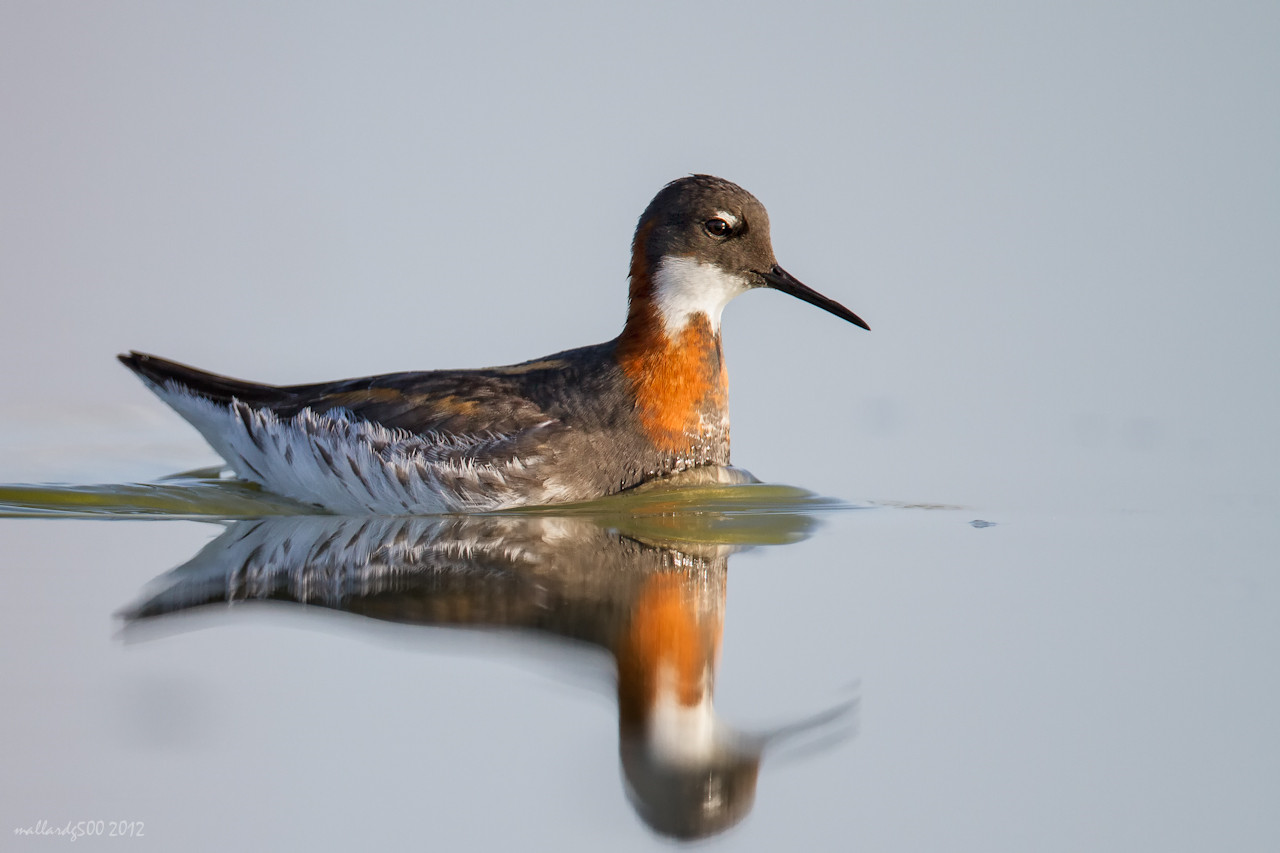