The barn swallow (Hirundo rustica) is the most widespread species of swallow in the world. It is a distinctive passerine bird with blue upperparts, a long, deeply forked tail and curved, pointed wings. It is found in Europe, Asia, Africa and the Americas. In Anglophone Europe it is just called the swallow; in Northern Europe it is the only common species called a “swallow” rather than a “martin”.

There are six subspecies of barn swallow, which breed across the Northern Hemisphere. Four are strongly migratory, and their wintering grounds cover much of the Southern Hemisphere as far south as central Argentina, the Cape Province of South Africa, and northern Australia. Its huge range means that the barn swallow is not endangered, although there may be local population declines due to specific threats.

The barn swallow is a bird of open country that normally uses man-made structures to breed and consequently has spread with human expansion. It builds a cup nest from mud pellets in barns or similar structures and feeds on insects caught in flight. This species lives in close association with humans, and its insect-eating habits mean that it is tolerated by man; this acceptance was reinforced in the past by superstitions regarding the bird and its nest. There are frequent cultural references to the barn swallow in literary and religious works due to both its living in close proximity to humans and its annual migration. The barn swallow is the national bird of Austria and Estonia.

The adult male barn swallow of the nominate subspecies H. r. rustica is 17–19 cm (6.7–7.5 in) long including 2–7 cm (0.79–2.76 in) of elongated outer tail feathers. It has a wingspan of 32–34.5 cm (12.6–13.6 in) and weighs 16–22 g (0.56–0.78 oz). It has steel blue upperparts and a rufous forehead, chin and throat, which are separated from the off-white underparts by a broad dark blue breast band. The outer tail feathers are elongated, giving the distinctive deeply forked “swallow tail”. There is a line of white spots across the outer end of the upper tail. The female is similar in appearance to the male, but the tail streamers are shorter, the blue of the upperparts and breast band is less glossy, and the underparts paler. The juvenile is browner and has a paler rufous face and whiter underparts. It also lacks the long tail streamers of the adult.

The song of the barn swallow is a cheerful warble, often ending with su-seer with the second note higher than the first but falling in pitch. Calls include witt or witt-witt and a loud splee-plink when excited (or trying to chase intruders away from the nest). The alarm calls include a sharp siflitt for predators like cats and a flitt-flitt for birds of prey like the hobby. This species is fairly quiet on the wintering grounds.

The barn swallow is similar in its habits to other aerial insectivores, including other swallow species and the unrelated swifts. It is not a particularly fast flier, with a speed estimated at about 11 m/s, up to 20 m/s and a wing beat rate of approximately 5, up to 7–9 times each second, but it has the manoeuvrability necessary to feed on flying insects while airborne. It is often seen flying relatively low in open or semi-open areas. 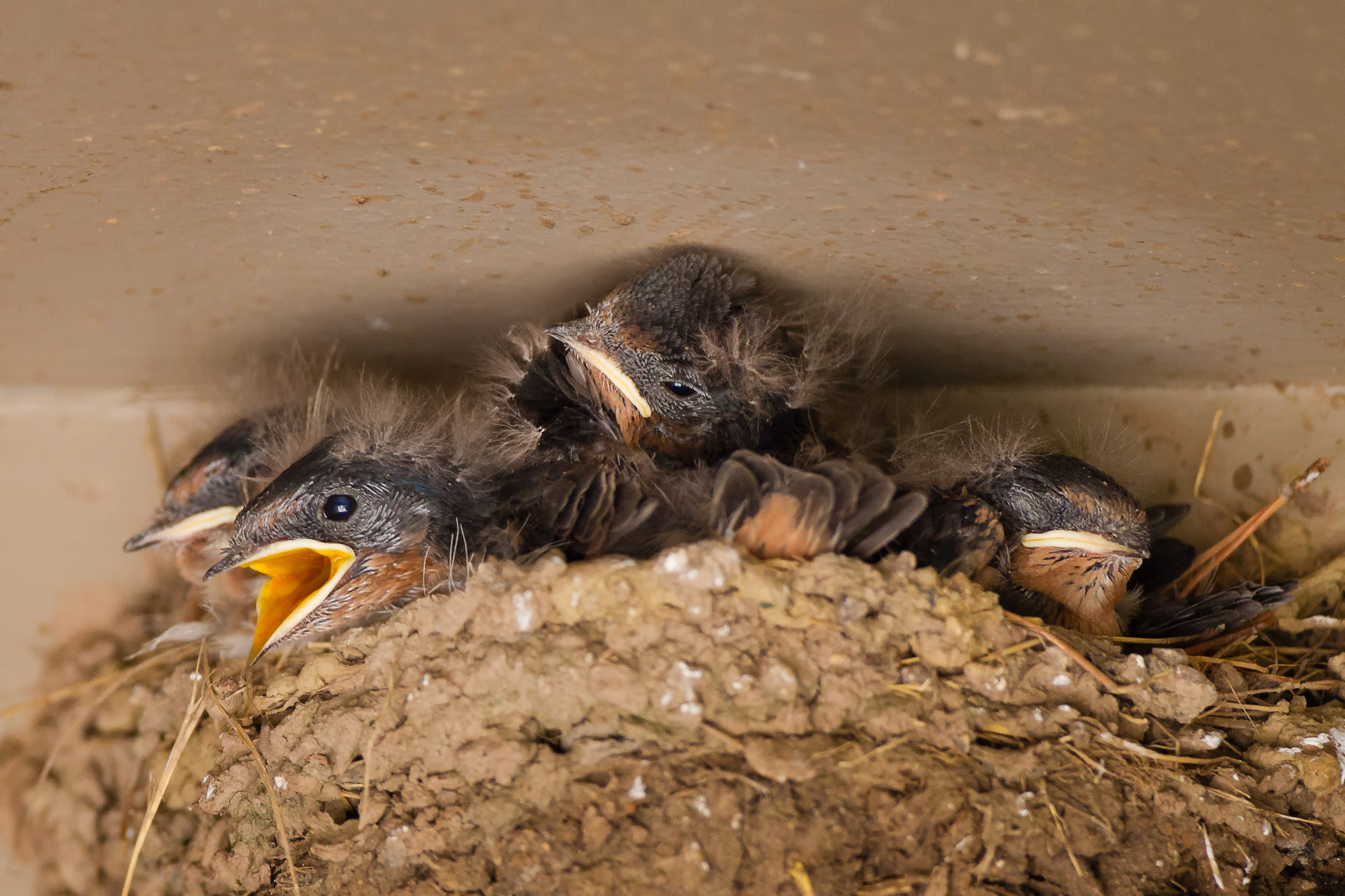