The great kiskadee (Pitangus sulphuratus) is a passerine bird. It is a large tyrant flycatcher; sometimes its genus Pitangus is considered monotypic, with the lesser kiskadee separated in Philohydor.

It breeds in open woodland with some tall trees, including cultivation and around human habitation, mainly found in Belize, and from the Lower Rio Grande Valley in southern Texas and northern Mexico south to Uruguay, but also it occurs all over Venezuela and Brazil (specially the central and south-southeastern regions), Paraguay and central Argentina, the Guyana coastline, and on Trinidad. It was introduced to Bermuda in 1957, and to Tobago in about 1970.

Adult great kiskadees are one of the largest of the tyrant flycatchers. They can measure from 21 to 27 cm (8.3 to 10.6 in) in length and weigh 52 to 68 g (1.8 to 2.4 oz). The head is black with a strong white eyestripe and a concealed yellow crown stripe. The upperparts are brown, and the wings and tail are brown with usually strong rufous fringes.

The black bill is short and thick. The similar boat-billed flycatcher (Megarynchus pitangua) has a massive black bill, an olive-brown back and very little rufous in the tail and wings. A few other tyrant flycatchers – some not very closely related – share a similar color pattern, but these species are markedly smaller.

The call is an exuberant BEE-tee-WEE, and the bird has an onomatopoeic name in different languages and countries: In Brazil its popular name is bem-te-vi and in Spanish-speaking countries it is often bien-te-veo (“I see you well!”) and sometimes shortened to benteveo.

The great kiskadee is a common, noisy and conspicuous bird. It is almost omnivorous, and hunts like a shrike or flycatcher, waiting on an open perch high in a tree to sally out to catch insects in flight, or to pounce upon rodents and similar small vertebrates. It will also take prey and some fruit from vegetation by gleaning and jumping for it or ripping it off in mid-hover, and occasionally dives for fish or tadpoles in shallow water, making it one of the few fishing passerines. They like to hunt on their own or in pairs, and though they might be expected to make good use of prey flushed by but too large for the smaller birds of the understory, they do not seem to join mixed-species feeding flocks very often. When they do, they hunt in the familiar manner. Such opportunistic feeding behavior makes it one of the commonest birds in urban areas around Latin America; its flashy belly and its shrill call make it one of the most conspicuous.

The nest, built by both sexes in a tree or telephone pole, is a ball of sticks with a side entrance. The typical clutch is two or three cream eggs lightly blotched with reddish brown. They are incubated by the female.

This alert and aggressive bird has a strong and maneuverable flight, which it uses to good effect when it feels annoyed by raptors. Even much larger birds are attacked by the great kiskadee, usually by diving down or zooming straight at them while they are in mid-air. Harsh calls are also often given during these attacks, alerting all potential prey in the area of the predator’s presence. If not very hungry, any raptor subject to a great kiskadee’s mobbing behavior is likely to leave, as it is well-nigh impossible to make a good catch when subject to the tyrant flycatcher’s unwelcome attention. In general, avian predators are liable to steer clear of an alert great kiskadee, lest their hunting success be spoiled, and will hunt the great kiskadee itself – though it is as meaty as a fat thrush – only opportunistically.

One of the diverse tyrant flycatchers resembling the great kiskadee in color is the aptly named Myiozetetes similis
To mammalian and squamate predators that can sneak up to nesting or sleeping birds, it is more vulnerable however. Even omnivorous mammals as small as the common marmoset (Callithrix jacchus) will try to plunder great kiskadee nests – at least during the dry season when fruits are scarce – despite the birds’ attempts to defend their offspring. One of two birds studied in the Parque Nacional de La Macarena of Colombia was parasitized by microfilariae.

The bright coloration of the great kiskadee makes it easy to recognize and as noted above, is shared by several other more or less closely related Tyrannidae. It is not known whether this apparent convergent evolution is a case of mimicry, and if so, whether the great kiskadee’s pugnaciousness encourages some predators to leave birds with such colors well alone. Given that some Tyrannidae are alleged to taste bad, the color may also be an aposematic warning of noxious chemicals contained in the birds’ meat. In a peculiar coincidence, the foxface rabbitfish (Siganus vulpinus) and related species have evolved a strikingly similar coloration and pattern; here it is almost certain that the colors are aposematic, as these fishes use a poisonous sting to defend themselves. 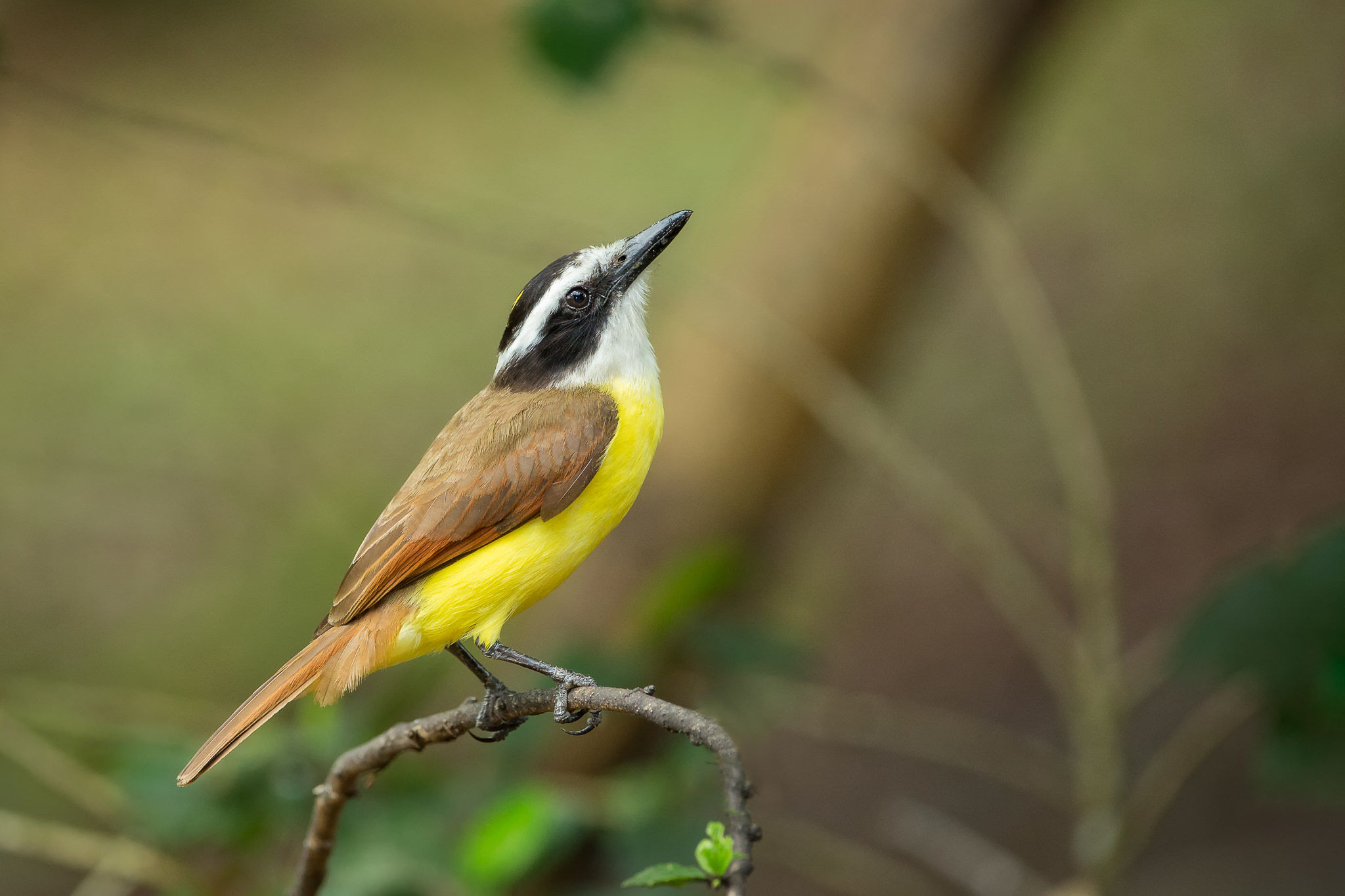