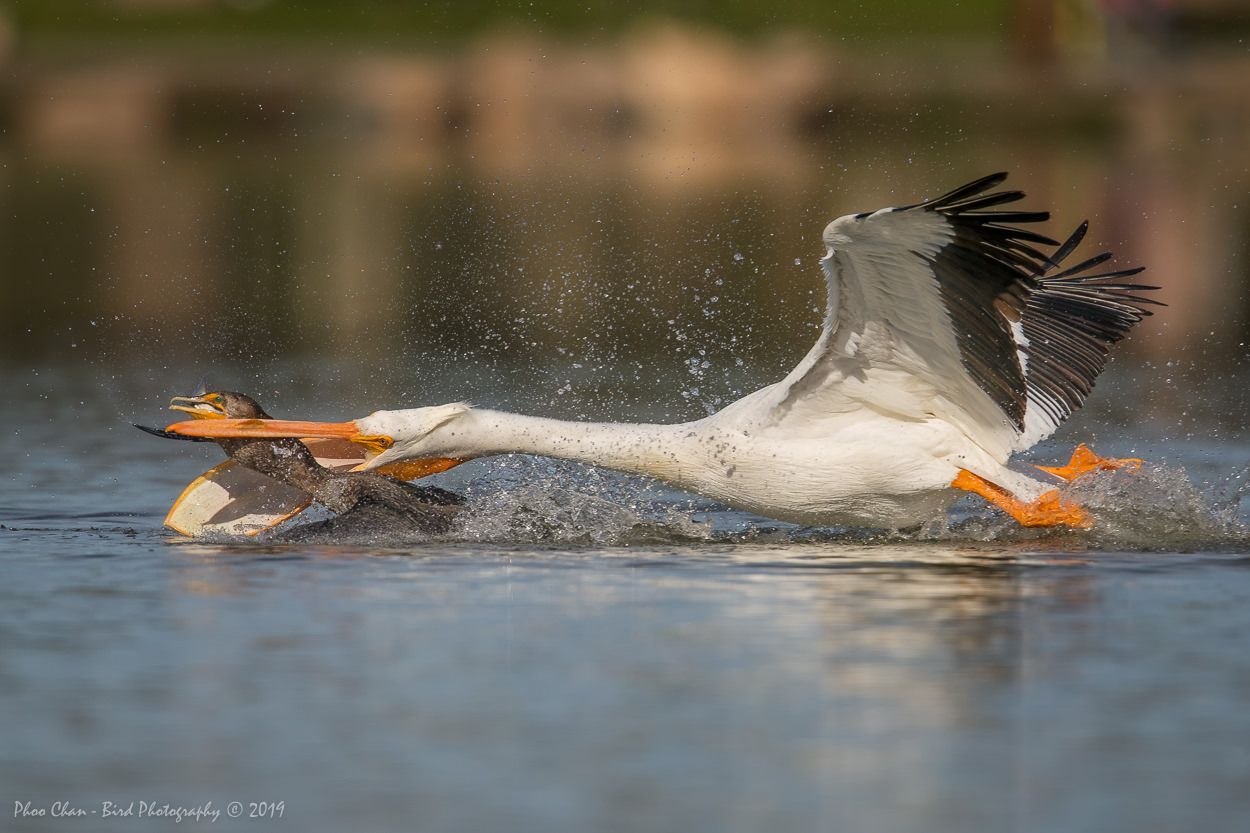 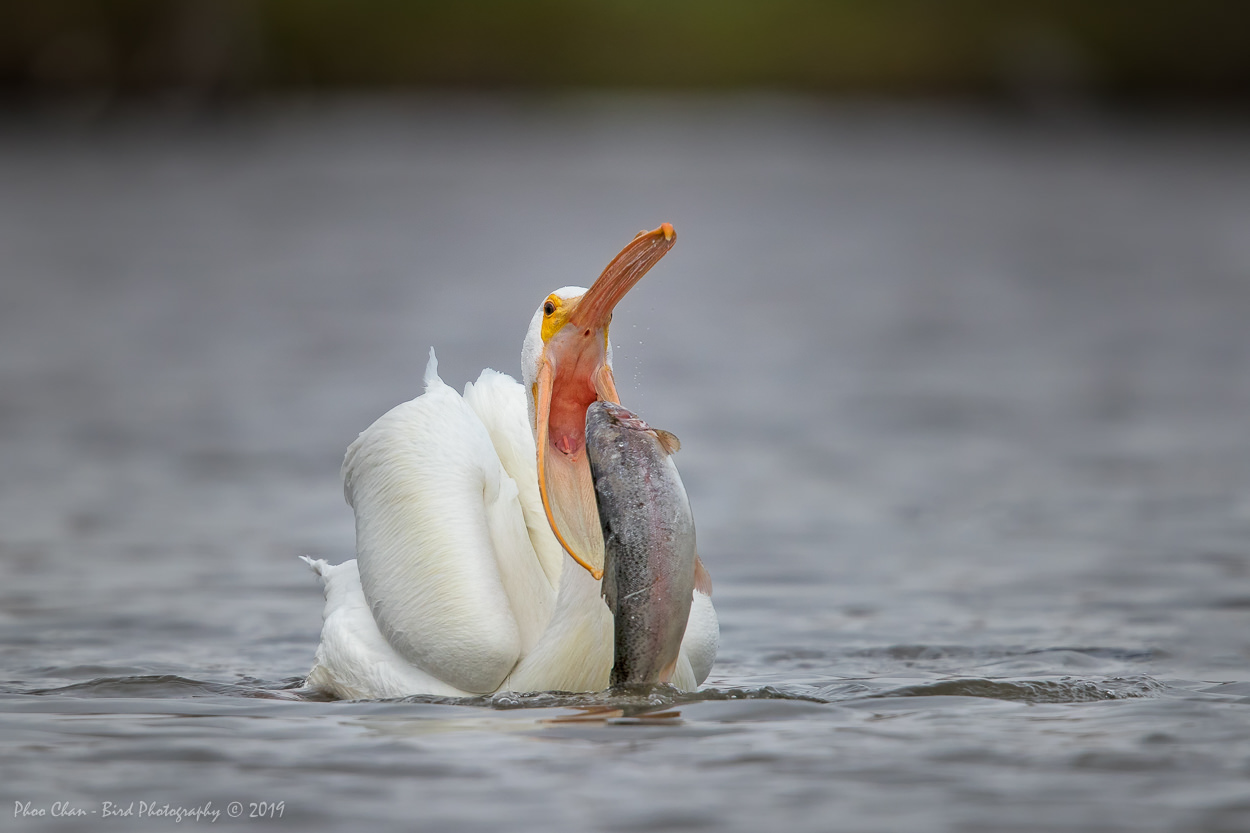 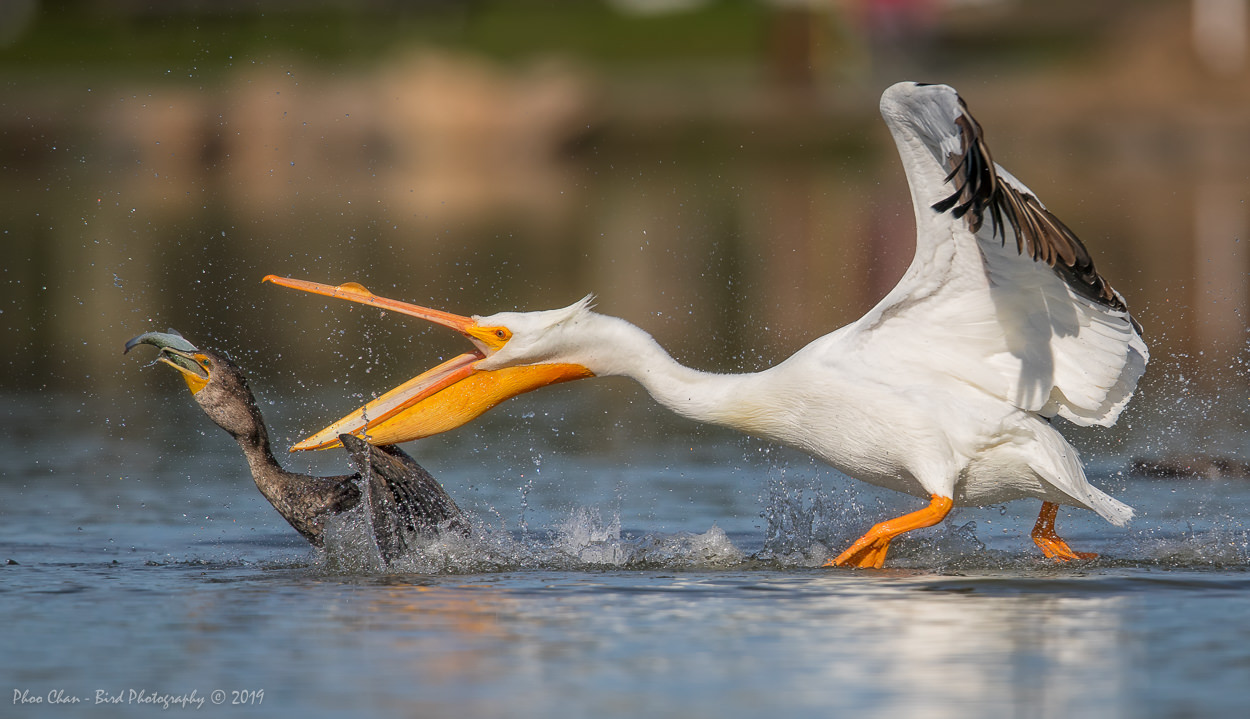 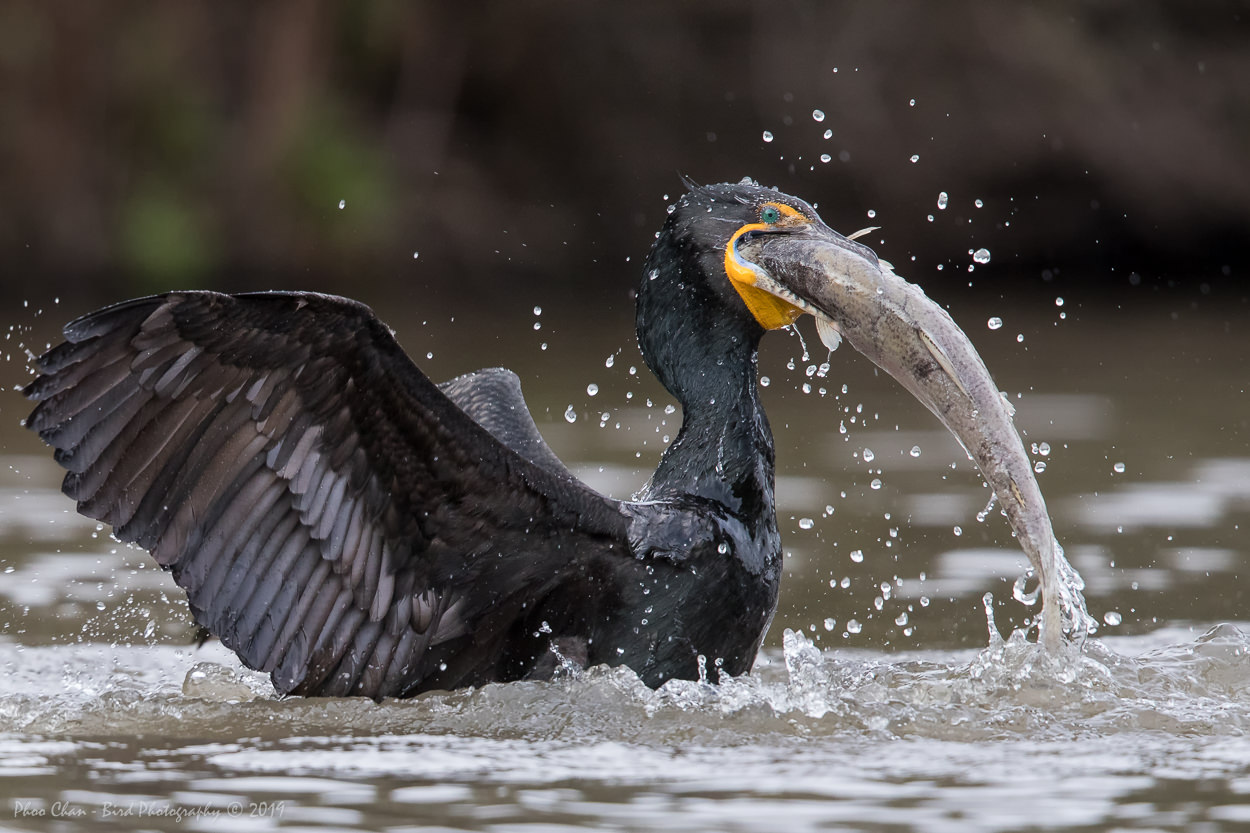 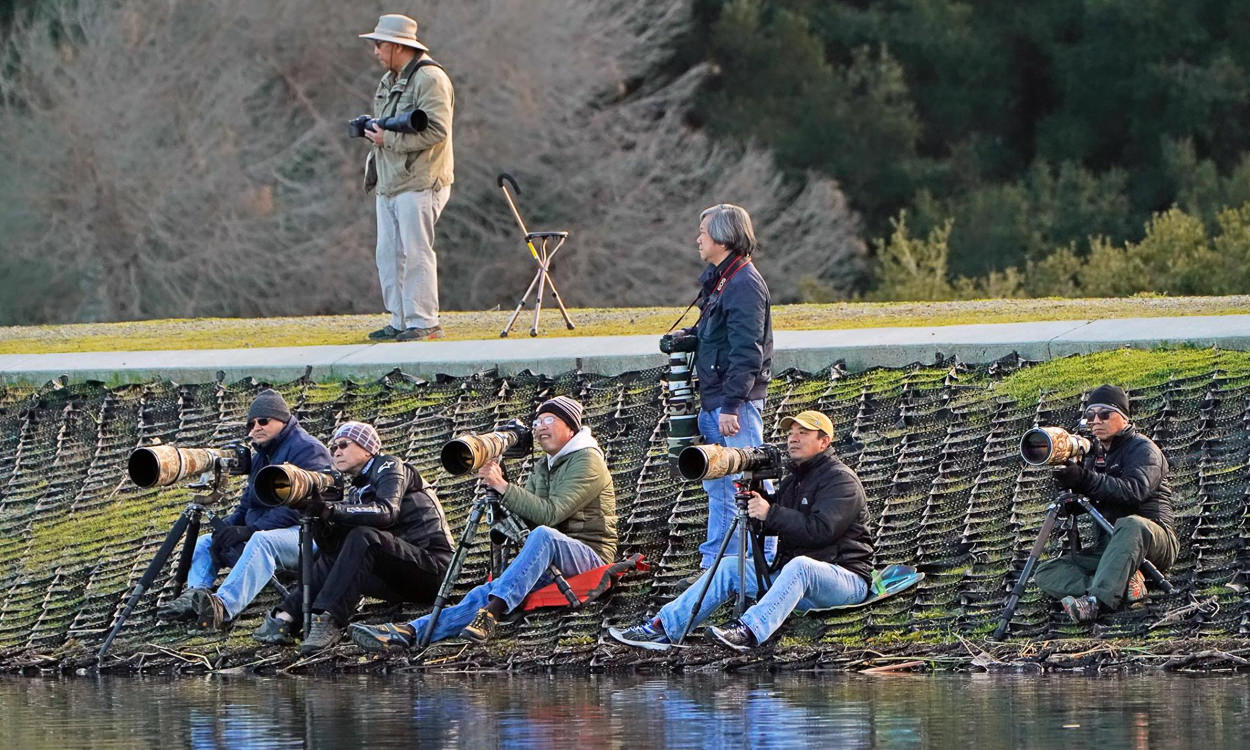 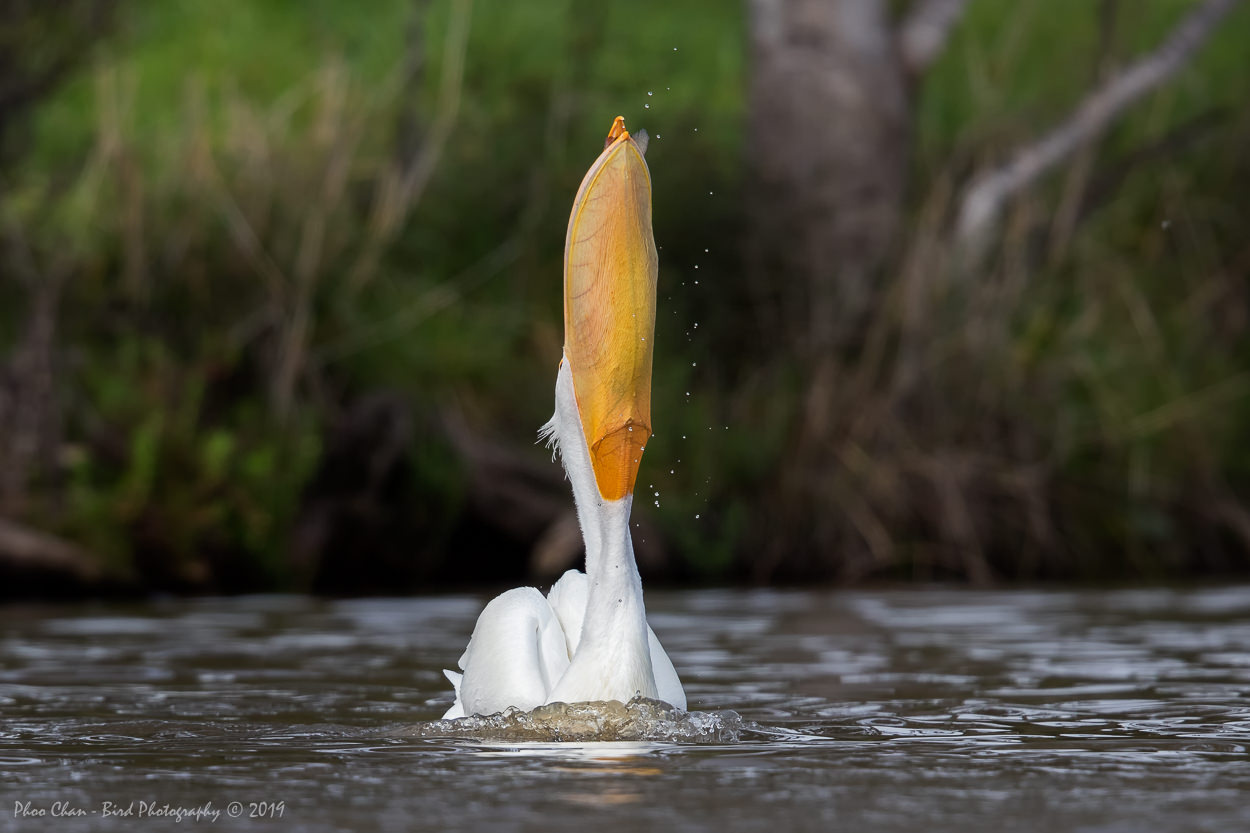 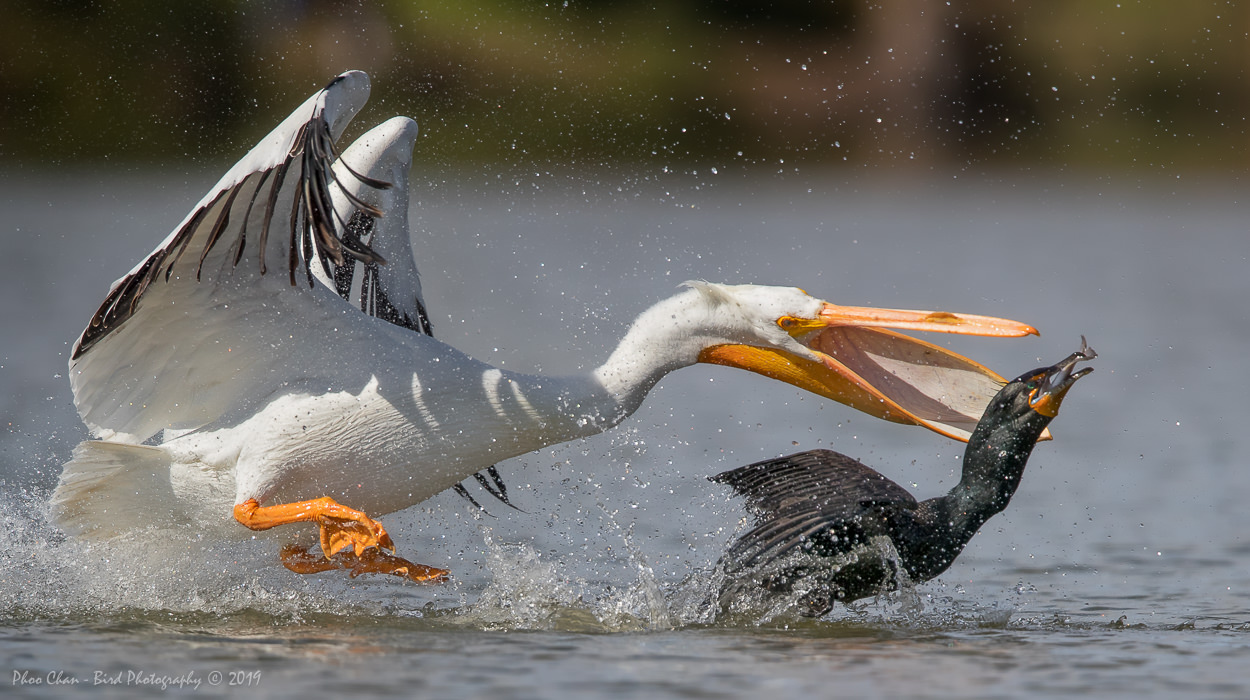 The long drought was over after we were blessed with ample rain pour filling up reservoirs everywhere. Spring Valley pond, located at Ed R. Levin County Park, Milpitas, CA has made a fresh come back inviting wildlife and human alike after such a long and lethargic break. The small pond which is popular for trout fishing, has long luring shorebirds and raptors alike ranging from pelicans, cormorants, egrets, herons, to ospreys and the majestic bald eagles to feast on the trouts stocked by the Department of Fish and Wildlife to the pond. It was amazing to witness how a food chain literally works in a split second. The scene even gained some media attention such as Foxnews and Daily Star from the UK. The pelican, being an opportunist simply seized the moment by stealing fresh caught fish from a smaller bird, the cormorant, since it was not able to catch such a big fish on its own. Often times cormorants were able to swallow the fish before the pelican got closer especially with smaller catch. However, it would be a little tricky with the big catch. Somehow cormorant has to flip the fish with its head down first before it could swallow it down and this has to be done very quickly since this opens up the window of opportunity for the pelican not only to snatch the catch but cormorant might get hurt in the process. It was not only the pelican trying to seize each opportunity but the rest of other cormorants would attack whoever has the catch. So speedy swallowing was the key. There were times the cormorant keeps diving down the water to get away from the bullies. It was amazing to see how the cormorant was able to swallow a fish which was much bigger than double of its head. However, there was a limitation. As you can see some choked and seemed to pass out, motionless for a few seconds and later just give up making it a low hanging fruit for the pelican. There were at least 30 to 50 cormorants raiding the pond and it was rather impressive to see how many fish each one could swallow. They took a break but not for long before they started fishing again – such an amazing metabolism system they have. It was interesting to see all of them took a break at the same time. Cormorant was definitely more efficient than the pelican in terms of fishing skills. Not only the cormorant can dive deep in the water but it can also swim and chase bigger fish in the water. In fact, fishermen in China trained cormorants to fish in rivers by tying a snare near the base of the bird’s throat preventing it from swallowing its catch all the way down. On the other hand, the pelican was limited to water surface hunting only since it cannot dive deep in the water. Its feathers restrict it to stay afloat on the water surface only. This means that it can go after small fish only within the surface since bigger fish are found in deeper water. It also means that it has to work harder to catch abundance of small fish to fill up its big belly. However, nothing beats the shortcut such as this.