The anhinga, sometimes called snakebird, darter, American darter, or water turkey, is a water bird of the warmer parts of the Americas. The word anhinga comes from the Brazilian Tupi language and means devil bird or snake bird. When swimming the origin of the name snakebird is apparent: only the colored neck appears above water so the bird looks like a snake ready to strike. They do not have external nares (nostrils) and breathe solely through their epiglottis.

The anhinga is placed in the darter family, Anhingidae, and is closely related to Indian (Anhinga melanogaster), African (A. rufa), and Australian (A. novaehollandiae) darters. Like other darters, the anhinga hunts by spearing fishes and other small prey using its sharp, slender beak.

Anhinga species are found all over the world in warm shallow waters. The American anhinga has been subdivided into two subspecies, A. a. anhinga and A. a. leucogaster, based on their location. A. a. anhinga can be found mainly east of the Andes in South America and also the islands of Trinidad and Tobago. A. a. leucogaster can be found in the southern United States, Mexico, Cuba, and Grenada. A fossil species Anhinga walterbolesi has been described from the Late Oligocene to Early Miocene of Australia.

The female anhinga is similar to the male except that it has a pale gray-buff or light brown head, neck, and upper chest. The lower chest or breast is a chestnut color and as compared to the male, the female has a more brown back.

The hatchling starts out bald but gains tan down within a few days of hatching. Within two weeks the tan down has been replaced by white down. Three weeks after hatching, the first juvenile feathers appear. Juveniles are mostly brown until first breeding after the second or third winter.

In order to dive and search for underwater prey, including fish and amphibians, the anhinga does not have waterproof feathers, (unlike ducks, which coat their feathers with oil from their uropygial gland). Because the anhinga is thus barely buoyant, it can stay below the surface more easily and for longer periods of time.

If it attempts to fly while its wings are wet, the anhinga has difficulty, flapping vigorously while “running” on the water. As do cormorants when drying their feathers, the anhinga will stand with wings spread and feathers fanned open in a semicircular shape, resembling a male meleagrine, which led to the anhinga being referred to colloquially as the “water turkey.”

Anhinga will often search for food in small groups. 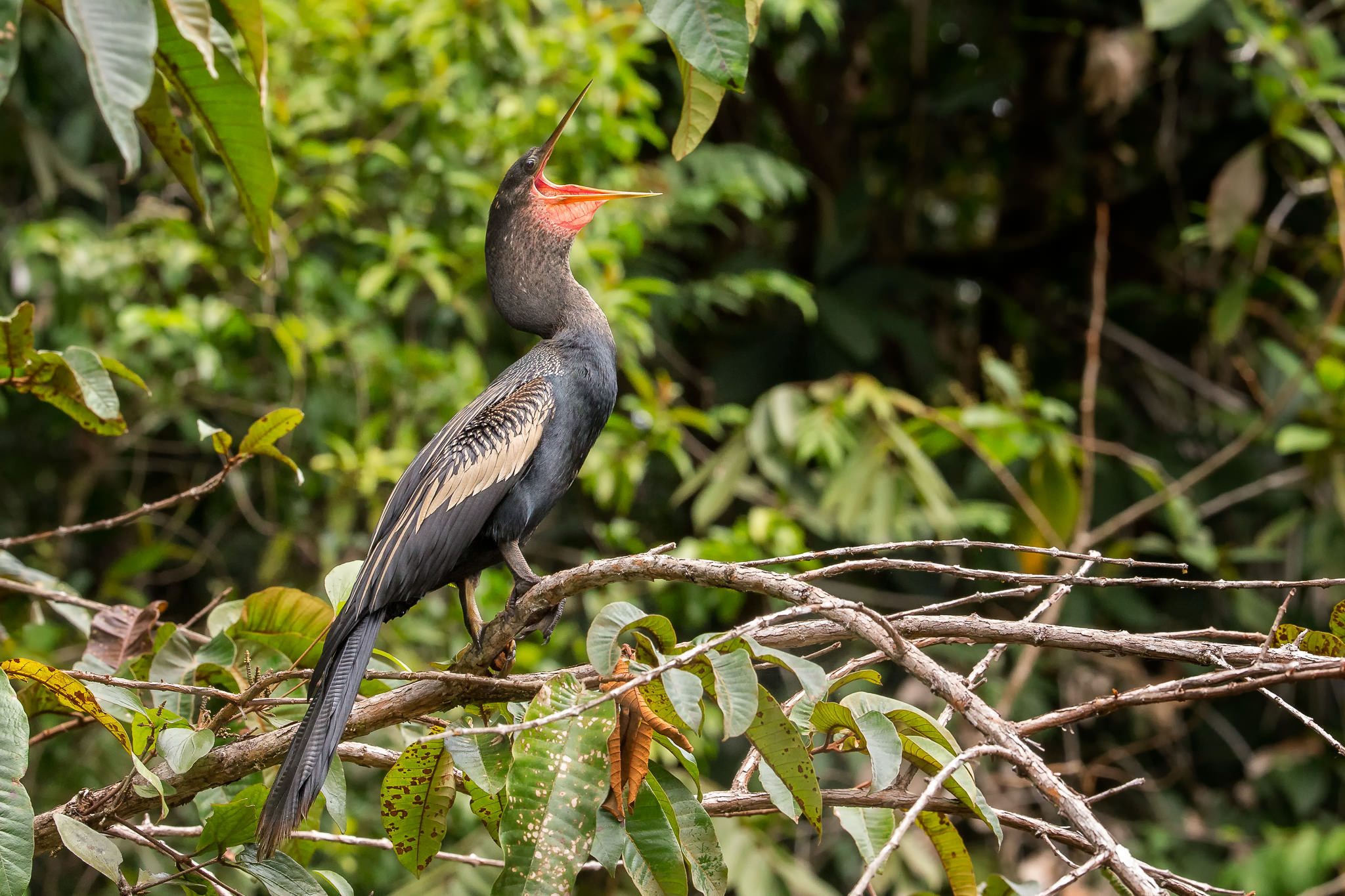