The greater roadrunner (Geococcyx californianus) is a long-legged bird in the cuckoo family, Cuculidae, from Southwestern United States and Mexico. The Latin name means “Californian earth-cuckoo”. Along with the lesser roadrunner, it is one of two species in the roadrunner genus Geococcyx. This roadrunner is also known as the chaparral cock, ground cuckoo, and snake killer.

The roadrunner is about 52–62 cm (20–24 in) long, has a 43–61 cm (17–24 in) wingspan and weighs 221–538 g (7.8–19.0 oz). It stands around 25–30 cm (9.8–11.8 in) tall and is the largest cuckoo of the Americas. Roadrunners have 4 toes on each zygodactyl foot; two face forward, and two face backward. The toes are brown in color and have pale gold spots. The upper body is mostly brown with black streaks and sometimes pink spots. The neck and upper breast are white or pale brown with dark brown streaks, and the belly is white. A crest of brown feathers sticks up on the head, and a bare patch of orange and blue skin lies behind each eye; the blue is replaced by white in adult males (except the blue adjacent to the eye), and the orange (to the rear) is often hidden by feathers.

The greater roadrunner nests on a platform of sticks low in a cactus or a bush and lays 3–6 eggs, which hatch in 20 days. The chicks fledge in another 18 days. Pairs may occasionally rear a second brood.

This bird walks around rapidly, running down prey. It feeds mainly on small animals including insects, spiders (including black widows), tarantulas, scorpions, mice, small birds and especially lizards and small snakes. Venomous serpents, including small rattlesnakes, are readily consumed. It kills prey by holding the victim in its bill and slamming it repeatedly against the ground.

Although capable of limited flight, it spends most of its time on the ground, and can run at speeds of up to 20 mph (32 km/h). Cases where roadrunners have run as fast as 26 mph (42 km/h) have been reported. This is the fastest running speed clocked for a flying bird, but not nearly as fast as the 43 mph (70 km/h) of the flightless and much larger ostrich. 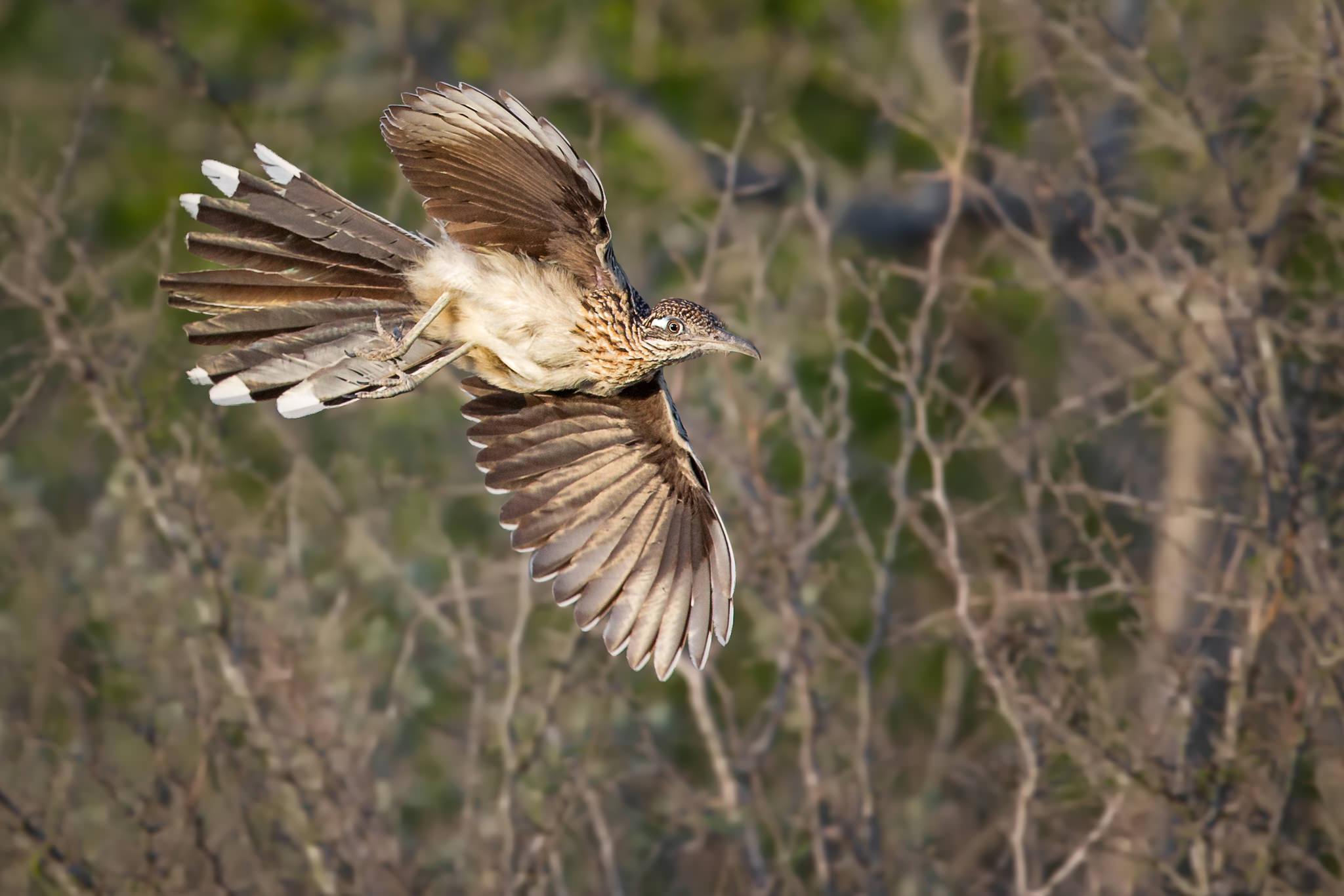