The Pileated Woodpecker (Dryocopus pileatus) is a large woodpecker native to North America. Roughly crow-sized, it normally inhabits deciduous forests in eastern North America, the Great Lakes, the boreal forests of Canada, and parts of the Pacific coast. It is the largest woodpecker in the United States, second to the critically endangered ivory-billed woodpecker.

Adults are 40 to 49 cm (16 to 19 in) long, span 66 to 75 cm (26 to 30 in) across the wings and weigh 250 to 400 g (8.8 to 14.1 oz), with an average weight of 300 g (11 oz). Each wing measures 21.4 to 25.3 cm (8.4 to 10.0 in), the tail measures 14 to 17.4 cm (5.5 to 6.9 in), the bill is 4.1–6 cm (1.6–2.4 in) and the tarsus measures 3.1–3.8 cm (1.2–1.5 in).[3] They are mainly black with a red crest, and have a white line down the sides of the throat. They show white on the wings in flight. The flight of these birds is strong and direct but has an undulating quality, similar to the relatively unique flight-style of all woodpeckers. Adult males have a red line from the bill to the throat, in adult females these are black. Two species found in the Old World, the white-bellied and black woodpeckers are closely related and occupy the same ecological niche in their respective ranges that the pileated occupies in North America.[3] The only North American birds of similar plumage and size are the ivory-billed woodpecker of the Southeastern United States and Cuba, and the related imperial woodpecker of Mexico. However, unlike the pileated, both of those species are extremely rare, if not extinct. Most reports of the ivory-billed woodpecker are believed to be erroneous reports of the far more common pileated.

The call is a loud, far-carrying laugh, sometimes described as a “jungle bird” call due to its wild, un-fettered quality. The northern flicker, which is very different looking and weighs about half as much as a pileated, has a similar-sounding call but has a weaker voice. Its drumming can be very loud, often sounding like someone striking a tree with a hammer.

Their breeding habitat is forested areas across Canada, the eastern United States and parts of the Pacific coast. This bird favors mature forests and heavily wooded parks. They specifically prefer mesic habitats with large, mature hardwood trees, often being found in large tracts of forest. However, they also inhabit smaller woodlots as long as they have a scattering of tall trees.

These birds mainly eat insects, especially carpenter ants and wood-boring beetle larvae. They also eat fruits, nuts, and berries, including poison ivy berries. Pileated woodpeckers will often chip out large and roughly rectangular holes in trees while searching out insects, especially ant galleries. They also will lap up ants by reaching with their long tongue into crevices. They are self-assured on the vertical surfaces of large trees but can seem awkward while feeding on small branches and vines. Pileated woodpeckers may also forage on or near the ground, especially around fallen, dead trees, which can contain a smorgasbord of insect life. They may forage around the sides of human homes or even cars and can occasionally be attracted to suet-type feeders. Although they are less likely feeder visitors than smaller woodpeckers, pileateds may regularly be attracted to them in areas experiencing harsh winter conditions.

Usually, pileated woodpeckers excavate their large nests in the cavities of dead trees. Woodpeckers make such large holes in dead trees that the holes can cause a small tree to break in half. The roost of a pileated woodpecker usually has multiple entrance holes. Pileated woodpeckers raise their young every year in a hole in a tree. In April, the hole made by the male attracts a female for mating and raising their young. Once the brood is raised, the pileated woodpeckers abandon the hole and will not use it the next year. When abandoned, these holes—made similarly by all woodpeckers—provide good homes in future years for many forest song birds and a wide variety of other animals. Owls and tree-nesting ducks may largely rely on holes made by pileateds in which to lay their nests. Even mammals such as raccoons may use them. Other woodpeckers and smaller birds such as wrens may be attracted to pileated holes to feed on the insects found in them. Ecologically, the entire woodpecker family is important to the well being of many other bird species. The pileated woodpecker will also nest in nest boxes about 4.6 m (15 ft) off the ground.

A pileated woodpecker pair stays together on its territory all year round and is a non-migratory species. It will defend the territory in all seasons, but will tolerate floaters during the winter. When clashing with conspecifics, they engage in much chasing, calling, striking with the wings, and jabbing with the bill. Drumming is most commonly to proclaim a territory and hollow trees are often used to make the largest sound possible.

Pileated woodpeckers have been observed to move to another site if any eggs have fallen out of the nest—a rare habit in birds. The cavity is unlined except for wood chips. Both parents incubate three to five eggs for 12 to 16 days. There is an average of clutch size of 4 per nest. The young may take a month to fledge. The oldest known pileated woodpecker was 12 years and 11 months old. Predators at the nest can include American martens, weasels, squirrels, rat snakes and gray foxes. Free-flying adults have fewer predators but can be taken in some numbers by Cooper’s hawks, northern goshawks, red-tailed hawks, great horned owls and barred owls. 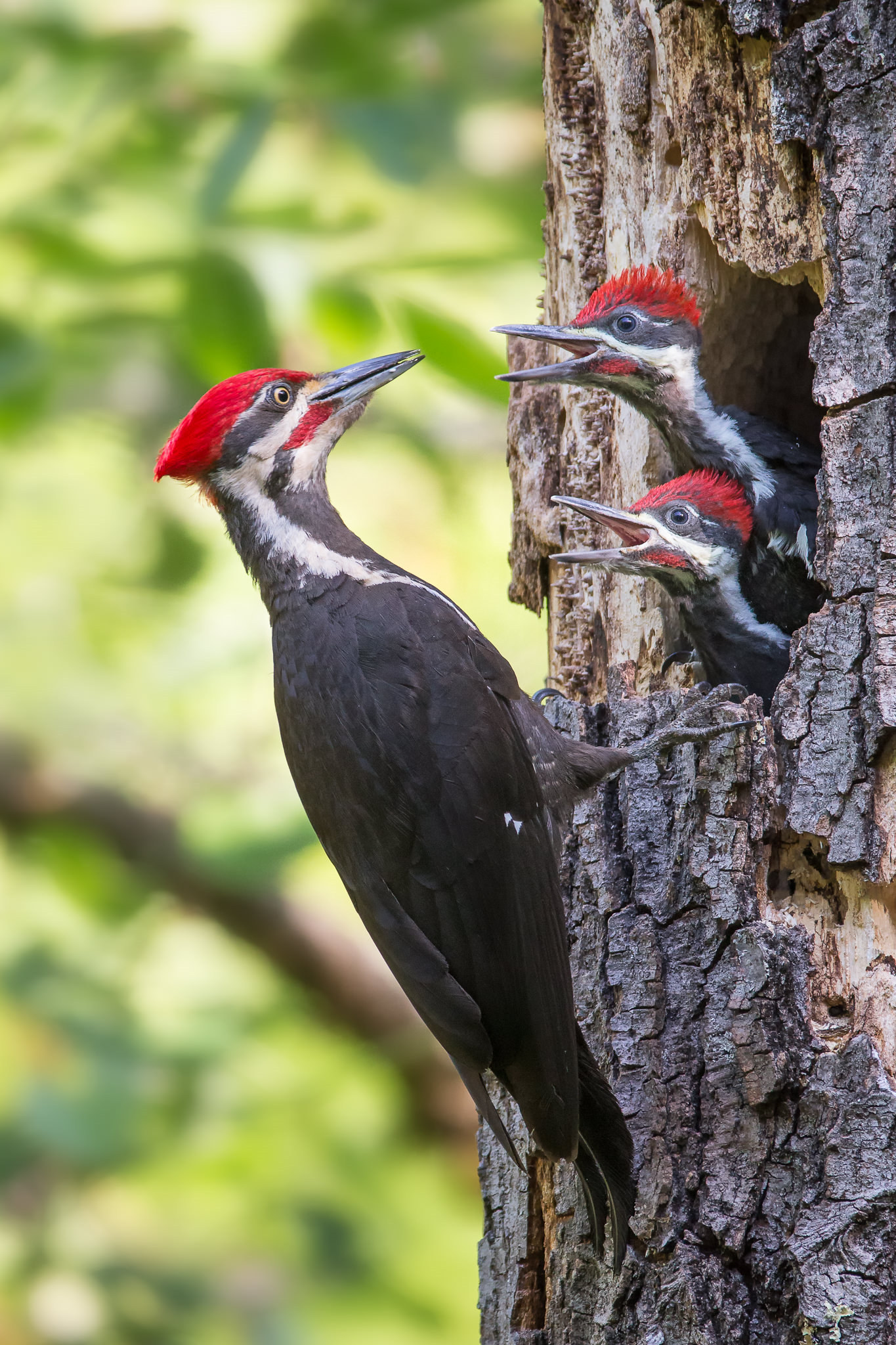