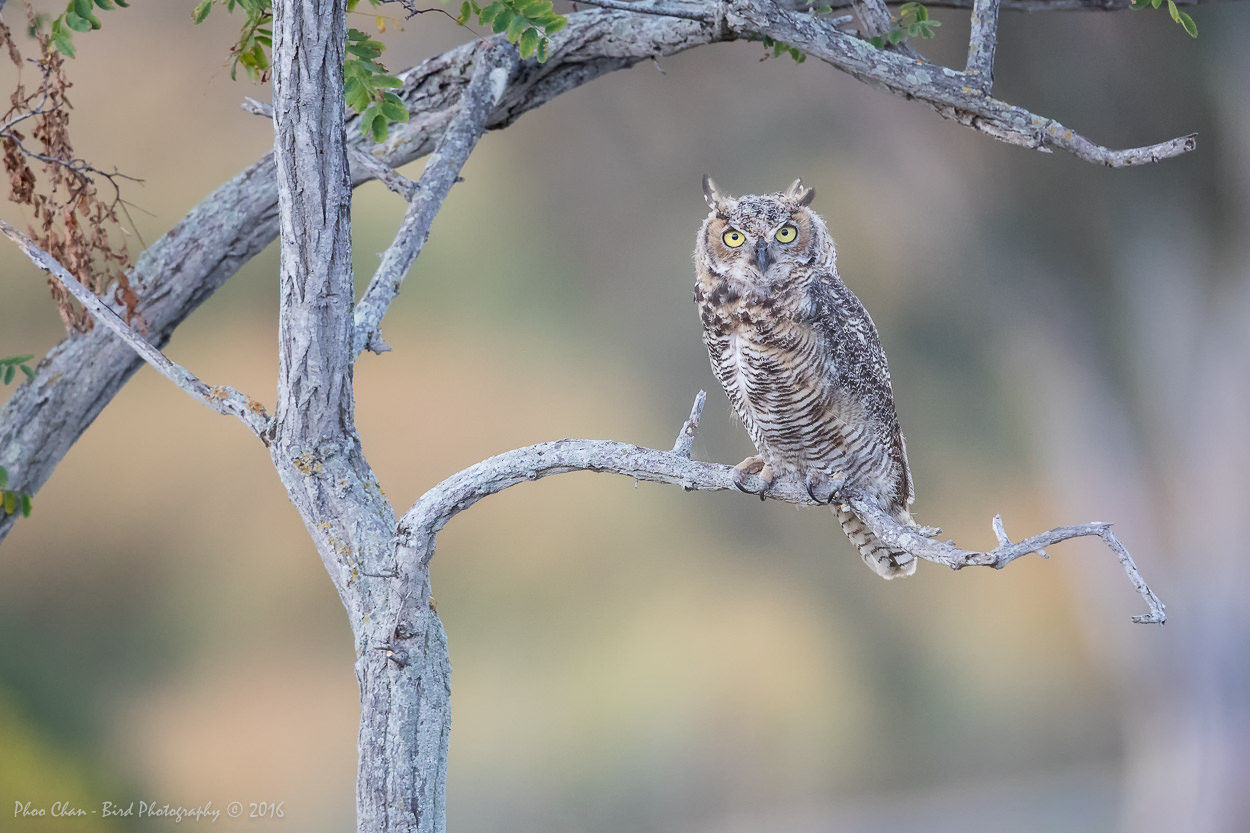 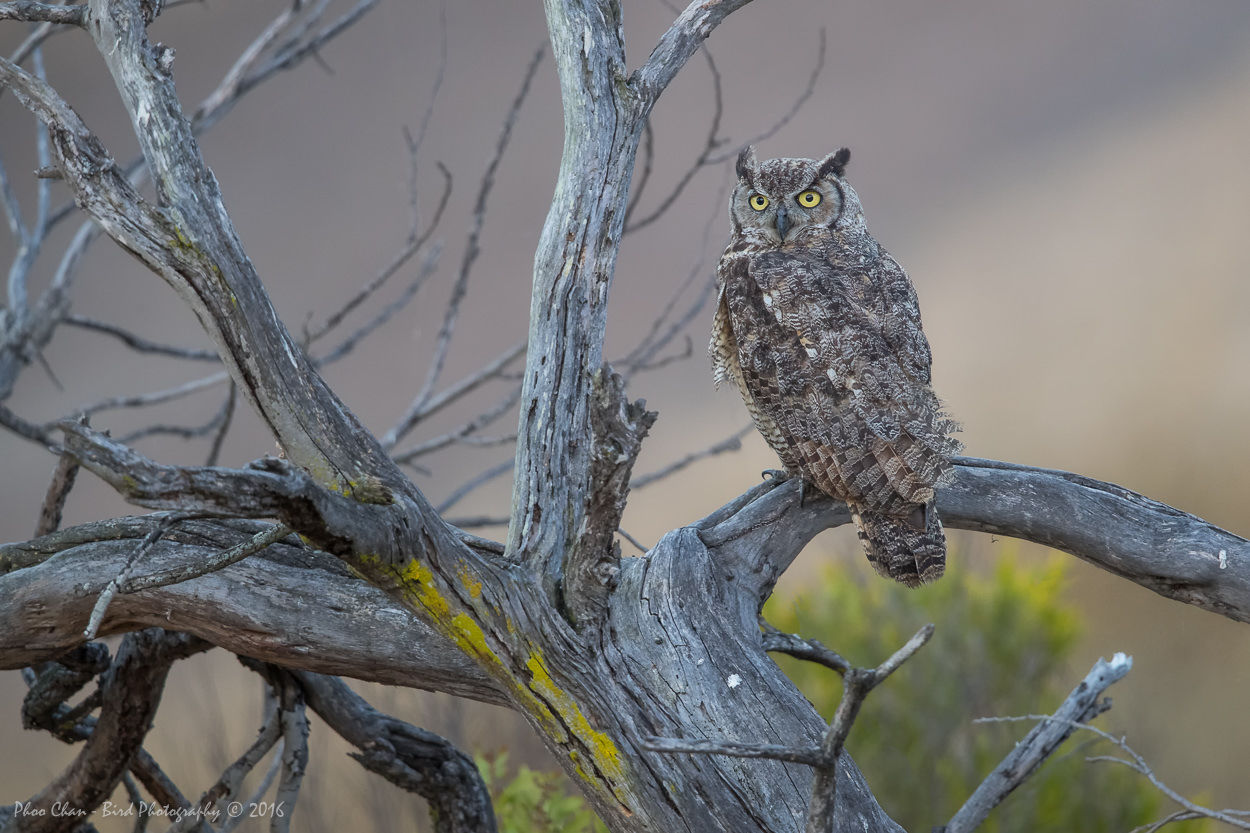 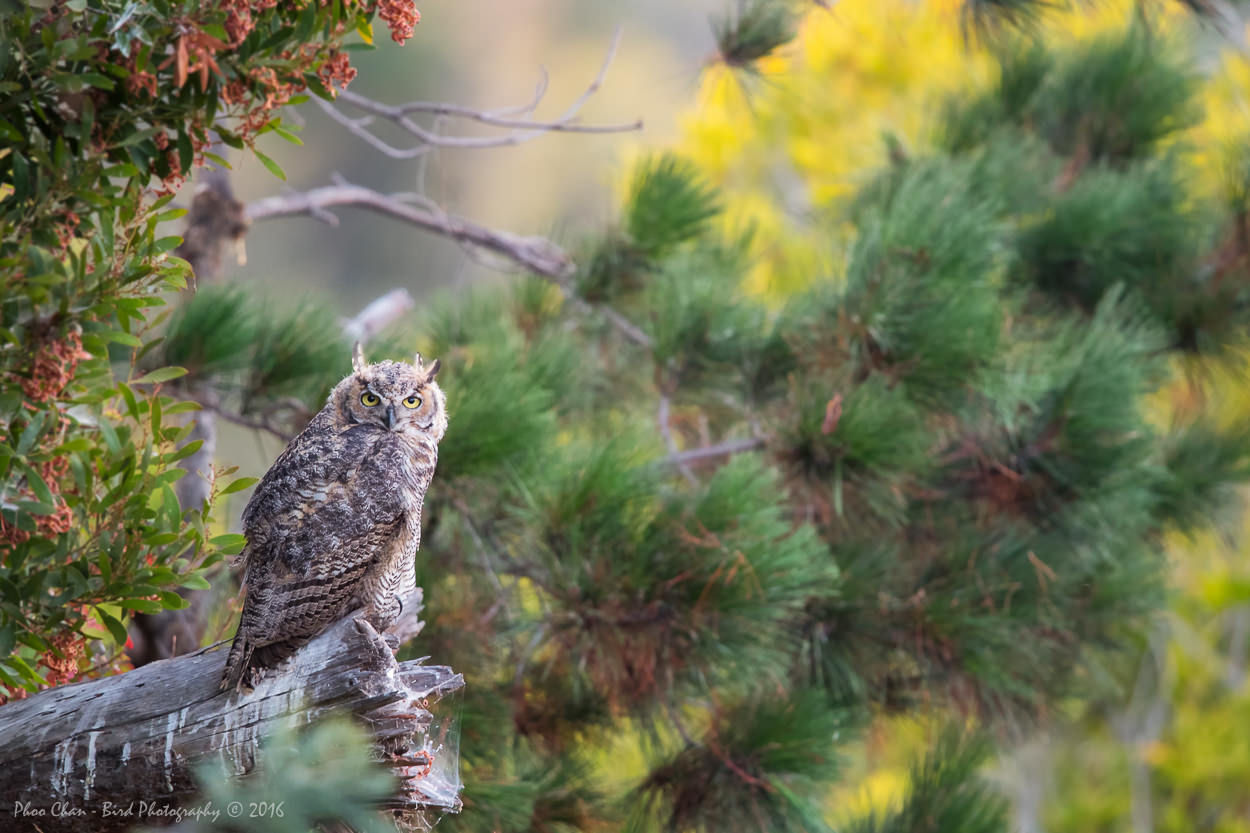 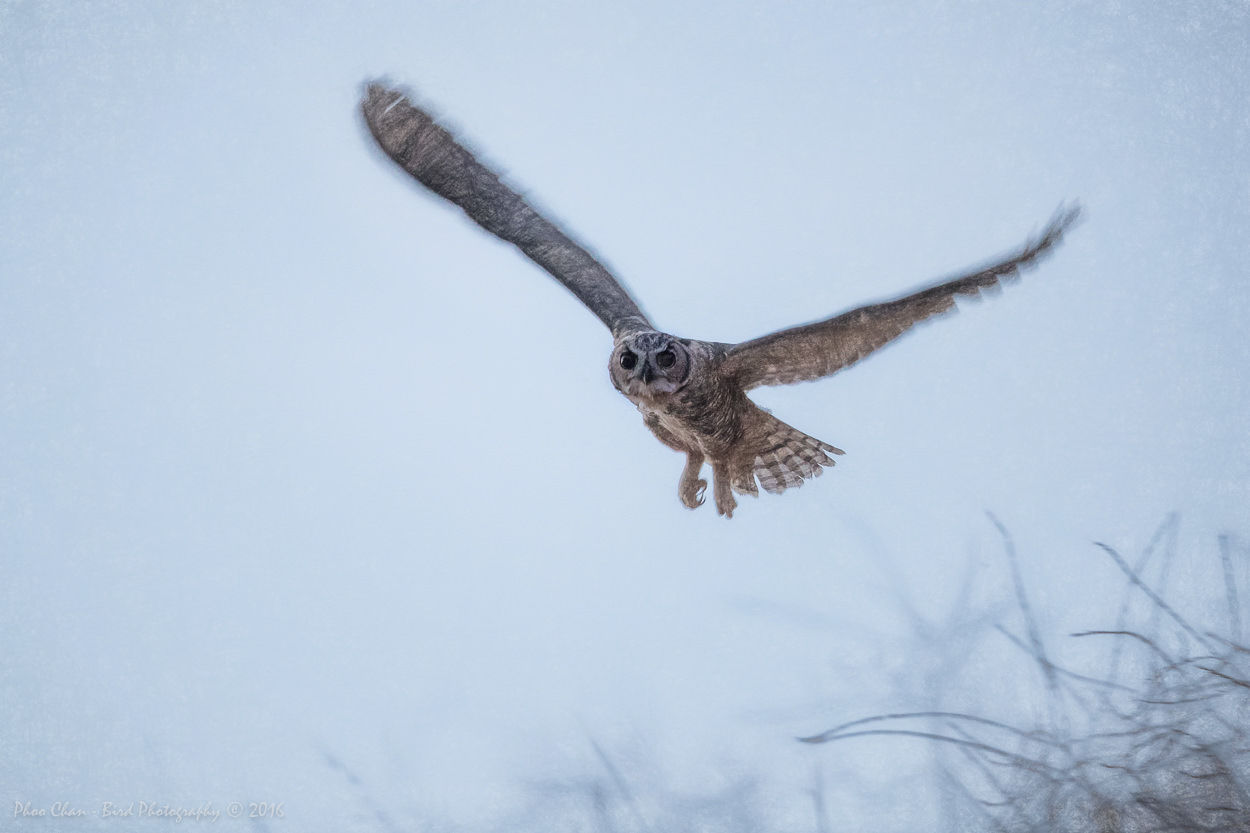 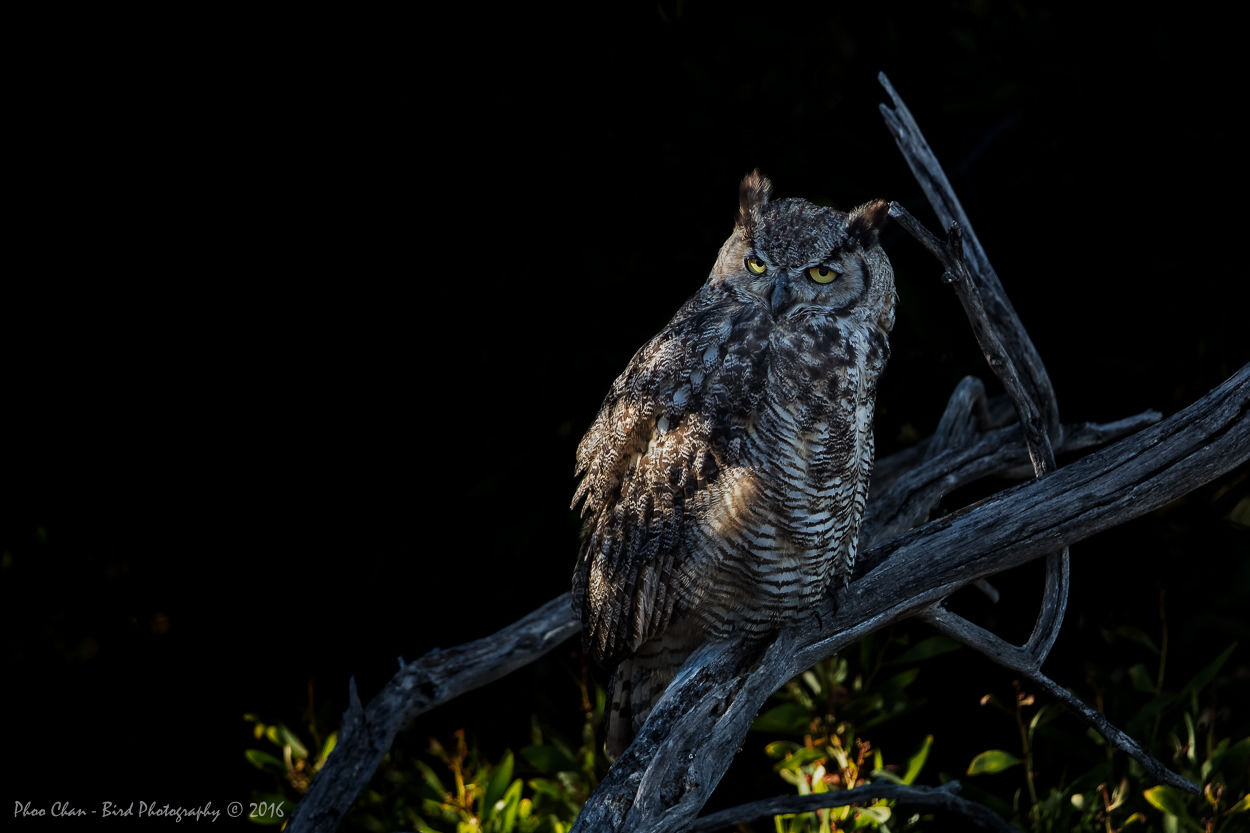 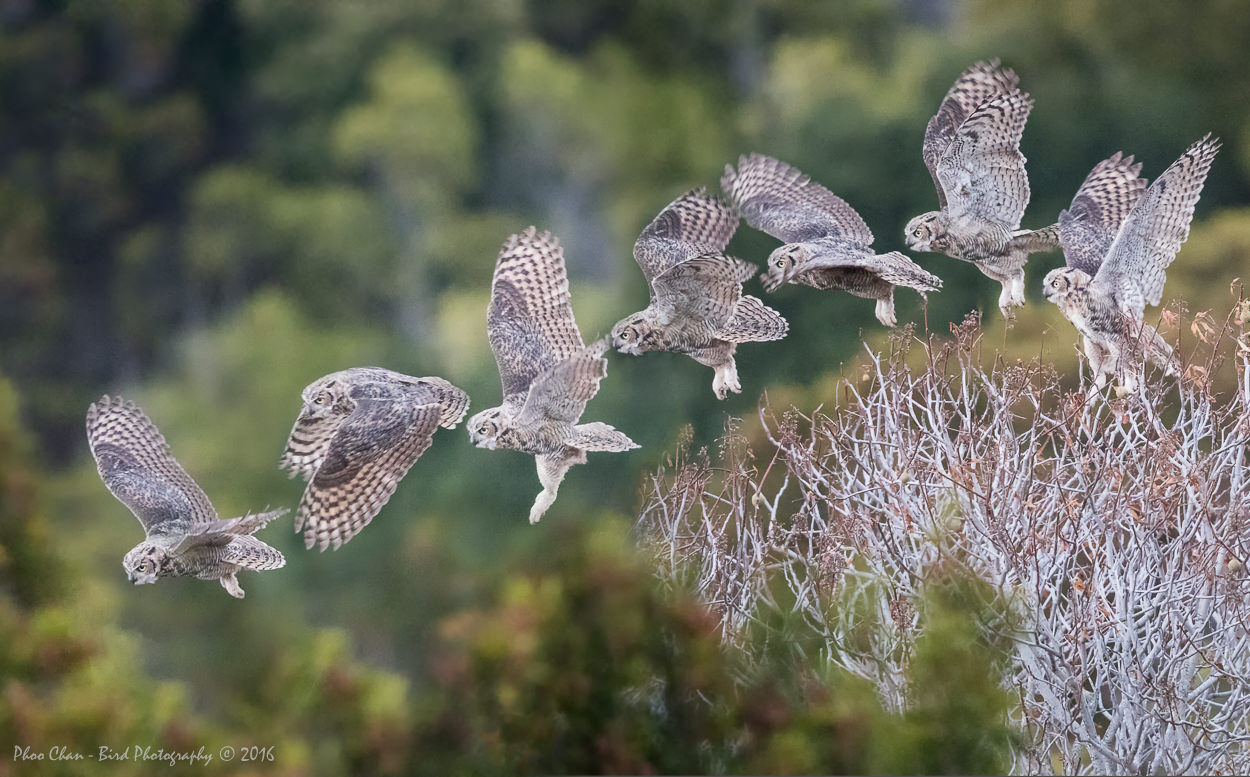 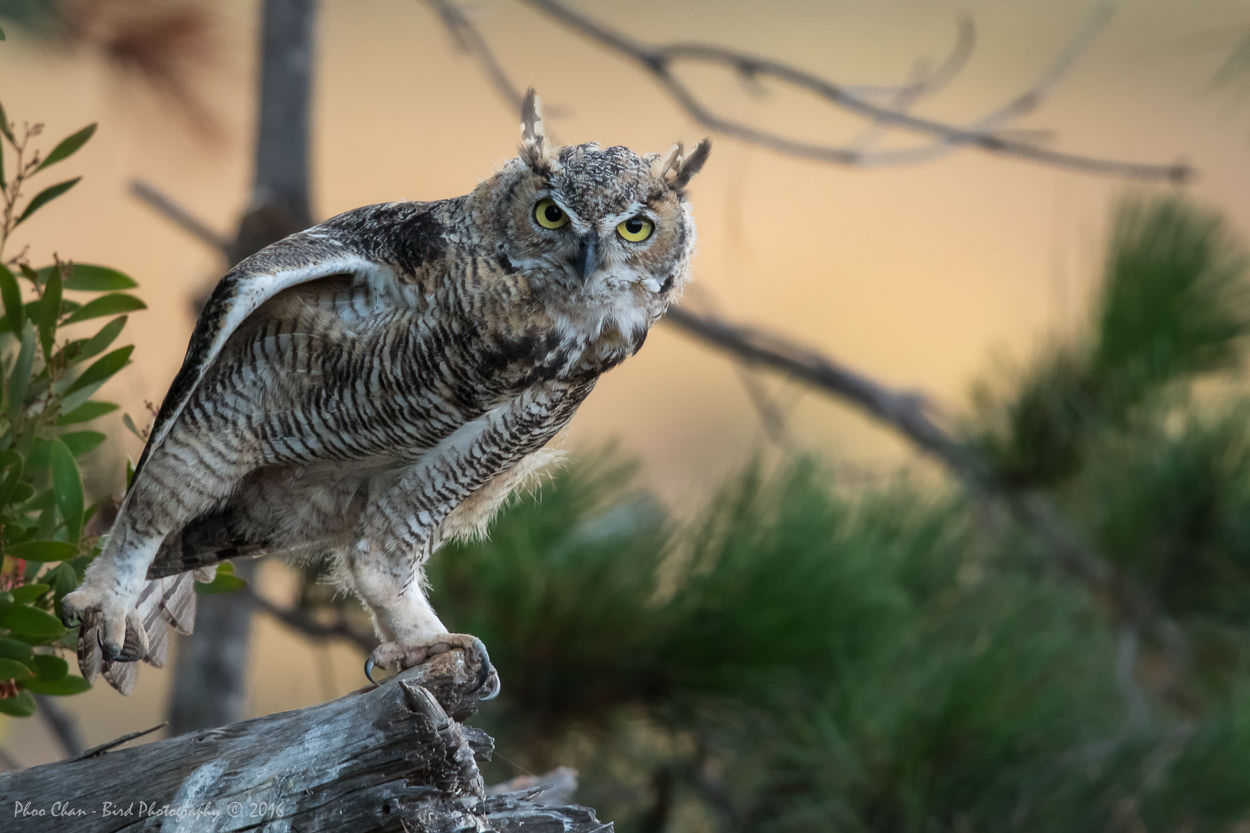 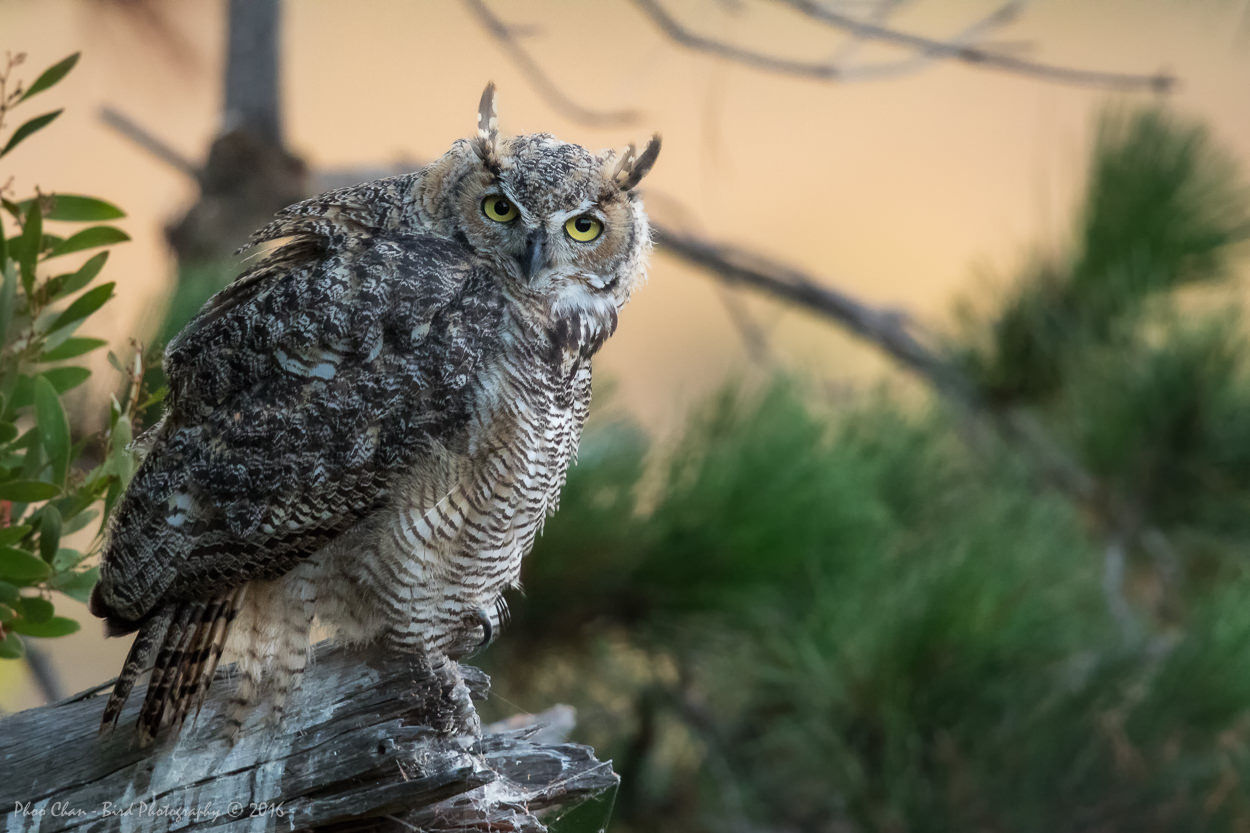 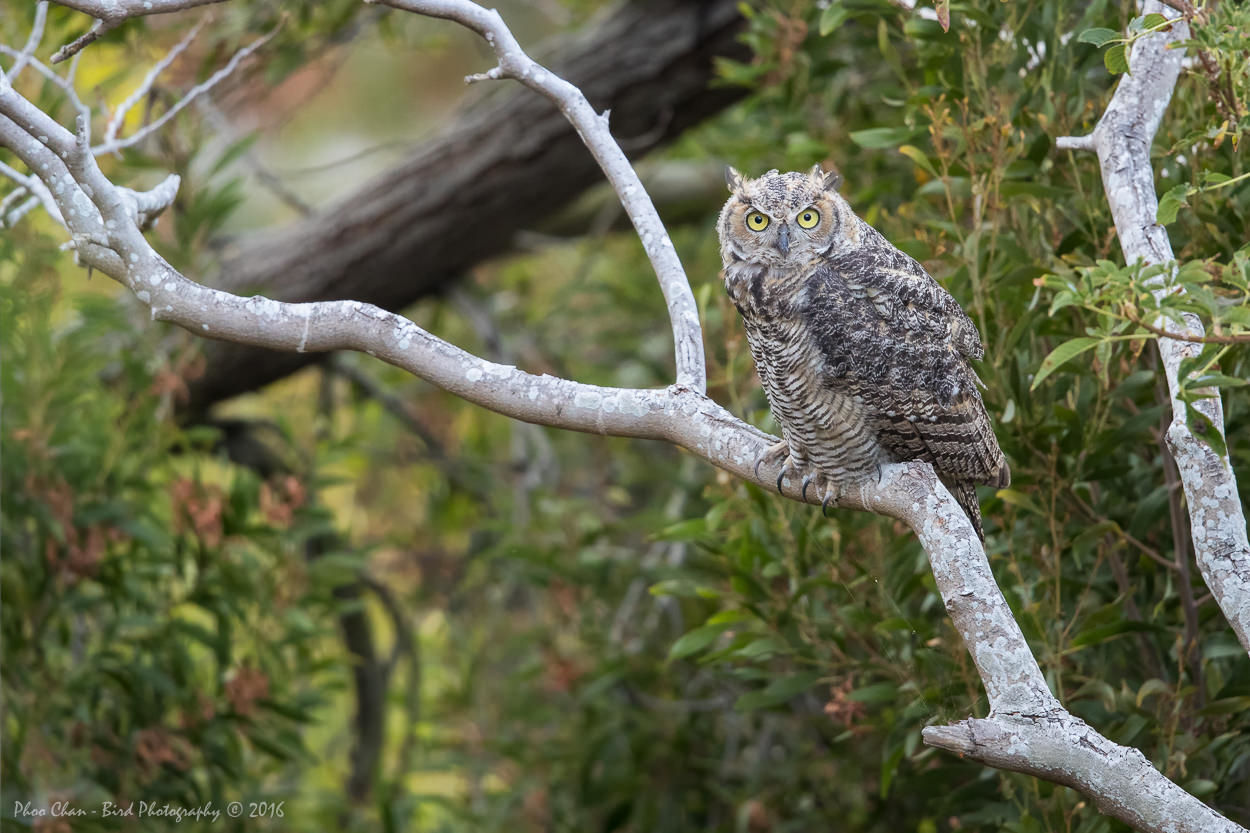 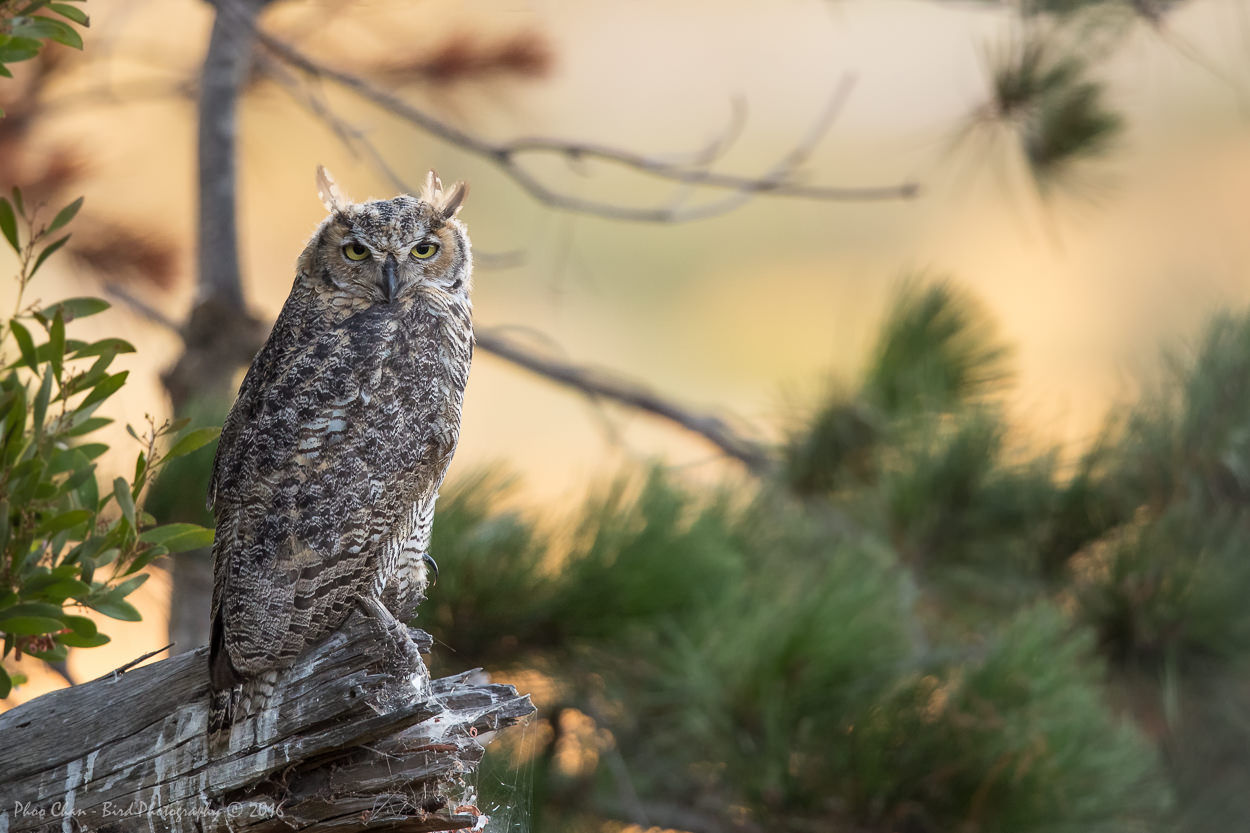 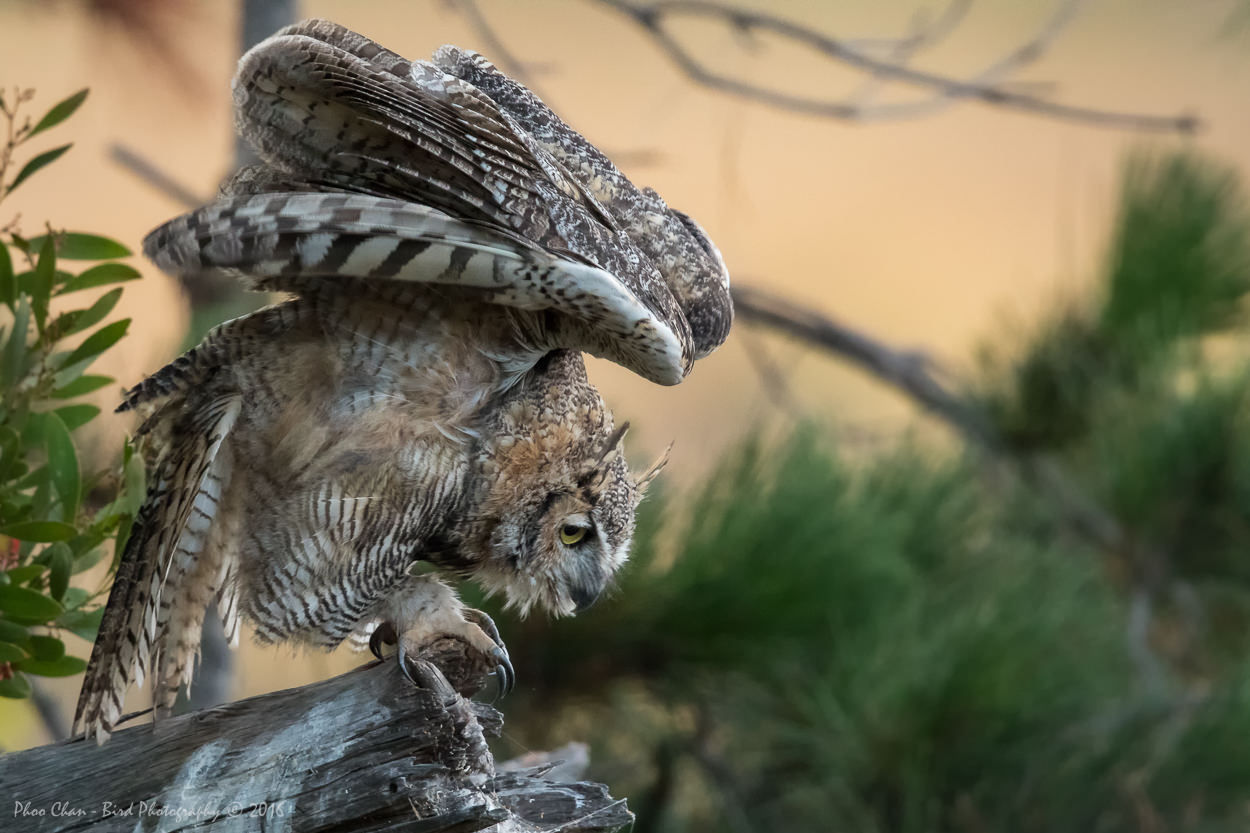 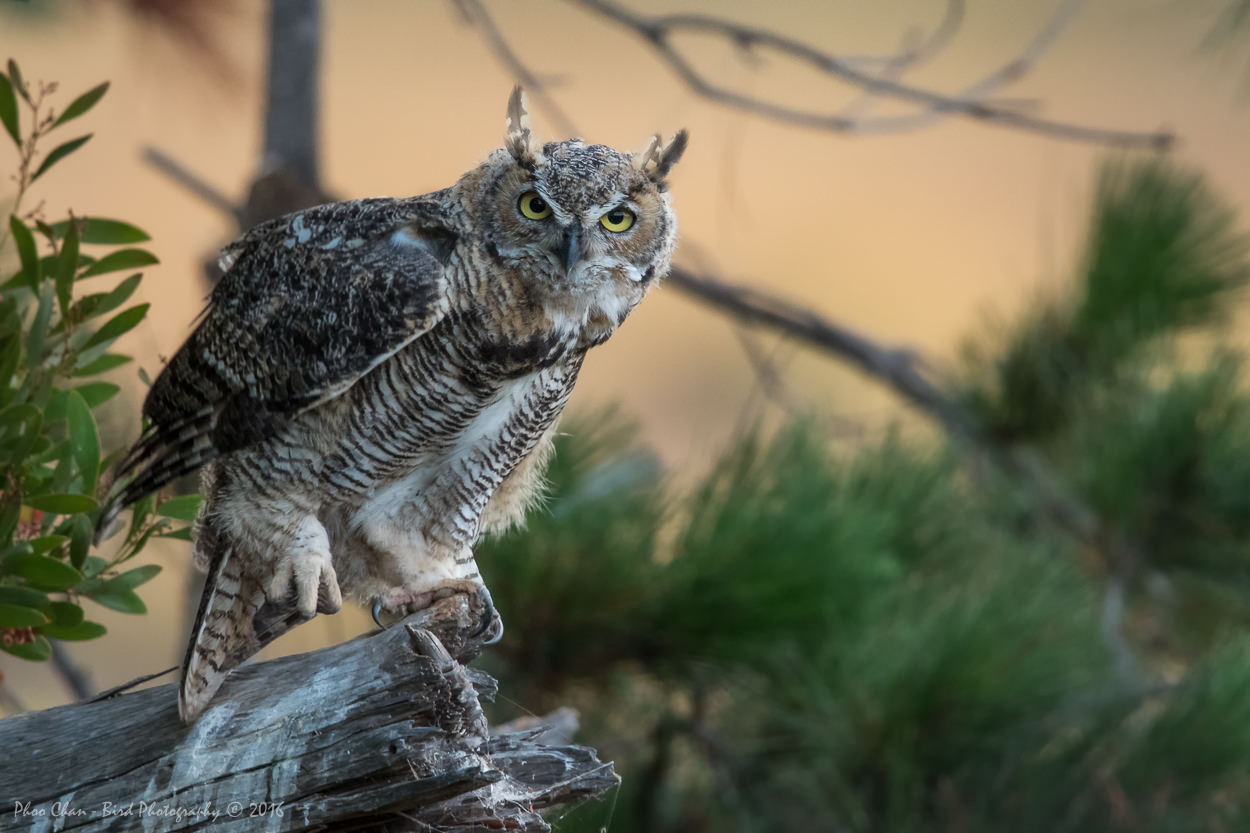 Despite being informed that the resident Great Horned Owl of Coyote Hills Regional Park was nesting at a lower perch than its usual spot this year a few months back, I did not get a chance to capture any of the ‘fur-balls’ shots until both of the chicks fledged and no longer had their cute looks. Nevertheless, during the span of two weeks starting from August, I have been frequenting the park almost on a daily basis, breaking the norm of being exclusively a weekend shooter. The timing of them showing up from around 6 to 8:00PM not only works well for me to be there after work, although I had to commute via my motorbike in order to make-up for the loss time due to daily peak hours heavy traffic on I-880, but the precious golden lighting certainly added some mood to the shots as well. The only downside is that I cannot bring a tripod with me on the motorbike, so no good video shooting and I have to stick to handheld shooting. Most of the good shots were taken right before the park’s closing time at 8PM. The golden lighting really sets the mood making the shots more interesting. However, having just perching shots is not good enough. The bar has to be raised, I need some in flight shots of these guys before they are gone. Getting a good incoming in-flight shot was not easy with these guys. Not only was there not much opening between the trees where they usually perch but most of the time they tend to fly away, giving you the infamous ‘butt shot’. You don’t have to read my BIF blog to know that shooting a flying away bird is not very desirable. Furthermore, they only start to fly when they are ready for hunting and by then there’s hardly any natural light left for shooting. Just to see if I can increase the chance of getting some descent in-flight shots, I tried my luck to see if the owls are active before sunrise by riding my wife’s bicycle in right after the park’s curfew hours (10PM to 5AM) and got there before 5:30AM. I was right: the juvis were busy practicing their flying and hunting but unfortunately the camera was not locking its focus due to no light. I only managed to get a few keepers shooting handheld at 1/250s in the dark. The owls fully dilated eyes added some haunting mood to the shot though. Despite having so many of the perching shots, the statement “it’s never enough” holds true for bird photographers. The minute someone else captured some shots with different pose and background, the bar is officially raised and you just have to have it too. However, luck plays a big role in getting the owls to repeat their perching especially on those rare and open perches so no matter how hard you try, there is a high chance you may never get the same shots that others made your eyes turned green with theirs. Nevertheless, the more you go out the more chances of you getting shots that would raise the bar even higher.